What’s behind the Trump administration’s antitrust challenge to the AT&T-Time Warner merger?

A presentation to be held next week at the University of California, Riverside will take a closer look at the Department of Justice’s recent legal challenge to block AT&T’s $108-billion acquisition of Time Warner Inc.

Since its establishment in 1933, the DOJ’s Antitrust Division has protected economic freedom by prohibiting the kinds of corporate mergers that, if completed, would reduce the competitive vigor of particular markets or consolidate monopoly power.

The division’s civil lawsuit challenging the AT&T-Time Warner merger was filed in November 2017 on the grounds that the acquisition “would substantially lessen competition, resulting in higher prices and less innovation for millions of Americans.”

It’s the first federal structural antitrust challenge to a “vertical merger” to go to trial in years, said Ken MacVey, a partner and litigator at Best Best & Krieger LLP in Riverside. According to an AT&T spokesperson, meanwhile, no such vertical merger has been blocked “for over 40 years.”

The proposed acquisition is considered a vertical merger, MacVey explained, because AT&T and Time Warner fulfill different roles in the chain of production, supply, and distribution; as the largest telecommunications company in the world, AT&T is a deliverer of content, while the media behemoth Time Warner — whose networks reach more than 90 million American households — supplies that content. 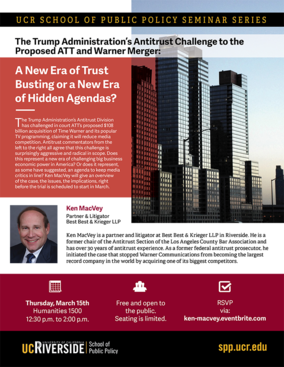 In advance of the trial’s kickoff on March 20, MacVey will visit UCR to lead a free, open-to-the-public seminar titled “A New Era of Trust Busting or a New Era of Hidden Agendas?” Produced in partnership with the School of Public Policy, the March 15 presentation will consider the various motives behind the Trump administration’s challenge to the merger, as well as the trial outcome’s potential impacts on the media landscape and future antitrust cases.

MacVey noted the lawsuit — which some critics have described as politically motivated to punish CNN, a subsidiary of Time Warner, for disparaging the Trump administration — could have far-reaching implications for different types of information purveyors.

“If the Antitrust Division is successful, it may mean antitrust lawsuits could be brought against firms like Amazon, Facebook, Apple, and Google,” he said. “Many people are concerned that only a few companies such as these will control what information we get, and that antitrust is needed to maintain diversity and competition in the dissemination of ideas and information.”

“A New Era of Trust Busting or a New Era of Hidden Agendas?” will take place in room 1500 of UCR’s Humanities building from 12:30 to 2 p.m. on Thursday, March 15. The event is free and open to the public, although advance registration is requested.

A former chair of the Antitrust Section of the Los Angeles County Bar Association, MacVey has more than 30 years of antitrust experience. As a former federal antitrust prosecutor, he initiated the case that stopped Warner Communications from becoming the largest record company in the world by acquiring one of its biggest competitors.