UC Riverside made larger gains than any university in the United States in the 2019 U.S. News & World Report Best Colleges rankings.

"I'm heartened that more university ranking systems are beginning to recognize diversity, social mobility, and student success as hallmarks of what make a great university - as opposed to exclusivity and wealth as primary measures," said Kim A. Wilcox, chancellor of UC Riverside.

This year’s list represents a major change in rankings methodology for U.S. News. The magazine, which began its Best Colleges list in 1983, has the most cited rankings system, but one that has been maligned for the weight it affords exclusivity and wealth.

But the biggest factor in UCR’s gains was the addition of a social mobility category. Social mobility considers the degree to which a university moves its graduates from the lowest to the highest income brackets.

“By including social mobility indicators, U.S. News is further recognizing colleges that serve all of their students, regardless of economic status,” said Robert Morse, chief data strategist for U.S. News. Morse, who created the rankings system more than 30 years ago, said Best Colleges places the greatest weight on graduation and retention rates.

The 2019 U.S. News list is led by Princeton, Harvard, Columbia, MIT, University of Chicago, Yale, and Stanford. Six other University of California schools are in the top 100 with UCR, the highest ranked of which is UCLA at No. 19.

It has been a heady fall for UCR in college rankings. This past month, UCR was named the No. 28 university in the U.S. by Washington Monthly, and No. 32 by Money magazine. 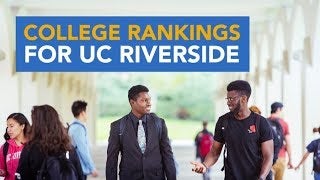