College on the spectrum

Though it’s difficult to pinpoint an exact number, a growing number of young people with autism spectrum disorder are choosing to go to college.

Some write about their diagnosis in their college application essays and immediately request services from on-campus disabled student services offices.

But many others don’t. They enter college hoping for a fresh start — without a label, without asking for accommodations, and often without even telling their professors and peers about their diagnosis.

The college experiences of students with autism are incredibly diverse, said autism researcher Jan Blacher, a distinguished professor in the Graduate School of Education at the University of California, Riverside. Until recently, however, those experiences have traditionally been under-studied, with limited data available to illustrate them or highlight how they might be improved.

More than two years in the making, a new first-of-its-kind film explores how it’s going at colleges as more and more students with an autism spectrum diagnosis enroll. Premiering this month, “Autism Goes to College” follows five Southern California college students with autism: two at UC Riverside; one at California State University, Long Beach; one at Cal State, Fullerton; and one at Mt. San Jacinto College. 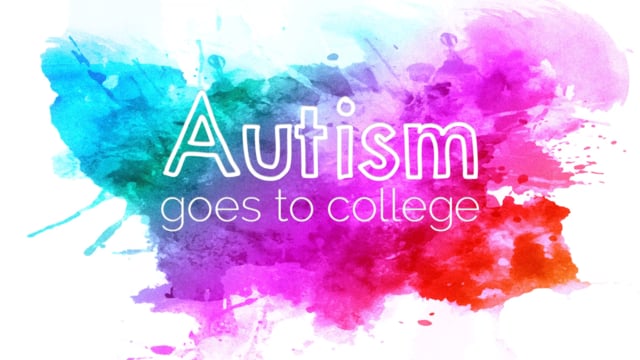 The film is set to debut on April 17 at 7:30 p.m. at the Aero Theatre in Santa Monica. Tickets can be purchased here. Follow-up screenings will take place on April 28 at 5:45 p.m. at the Lido Theater in Newport Beach (tickets here) and on June 6 at 7 p.m. at UCR’s Barbara and Art Culver Center of the Arts in downtown Riverside.

Blacher, who served as the film’s executive producer, joined director Erik Linthorst and writer/producer Jody Becker, the filmmakers behind the award-winning PBS documentary “Autistic-Like: Graham’s Story,” which chronicled Linthorst and his wife’s quest for a clear diagnosis for their young son.

Together, the team recruited interviewees eager to share their experiences and encourage their peers to access college opportunities available to all academically capable students in the state.

The concept for the film sprang from earlier research conducted by Blacher at UCR to discern how colleges are responding to increasing levels of neurodiversity on campus, and how they can do better.

Blacher, who also serves as the founding director of UCR’s SEARCH Center, a free autism screening clinic for families, was especially curious about the campus community’s knowledge and acceptance of students with autism.

In a project they called “Autism 101,” she and her doctoral students conducted campuswide surveys of knowledge about autism — a test many respondents flunked — and interviewed both faculty members and students with autism about their college experiences. The seeds were sown for “Autism Goes to College,” which began production in 2017.

“There’s been tremendous demand for this film, especially at colleges,” Blacher said, noting improvements in early-intervention methods have resulted in higher numbers of students with autism going on to attend college in recent years.

While some college students with autism get by with no support from their schools, others struggle, the team found. Most ultimately reach out for some help with tackling the usual college challenges — academic loads, making friends, handling roommate situations and romances, managing finances, and sometimes more serious matters.

Meanwhile, disability services counselors at colleges are piloting a patchwork of new approaches and programs to help both students and faculty members better accommodate special needs.

College faculty members face a rapidly changing student body, typically with no training in how to work with students on the spectrum. Professors are tasked with balancing the needs of typical students with the needs of students with a growing range of visible and “invisible” disabilities.

Moreover, often they don’t know how, or even if, to help students they think might be on the spectrum if those students haven’t disclosed their diagnosis.

According to Blacher, for students with autism, engagement with their professors could be a key element of having a successful college experience. Yet as she and the documentary team discovered, even in the absence of such engagement, students with autism learn to navigate the waters of higher education largely on their own terms.

“These students know there is no map for them, and we found that even if they feel lost for a while, they just keep moving forward,” said Linthorst, a UCR alumnus who graduated in 1994 with a bachelor’s degree in English. “We were blown away by the insights and advice these students were ready to share. College was working for them pretty much because they were making it work.”

Through intimate interviews with students, their parents, siblings, professors, and on-campus counselors, “Autism Goes to College” shows that a diploma and career path can be realistic goals for a population with historically high under- and unemployment.

In particular, Blacher said, the stories featured suggest that as more and more students with an autism diagnosis make it to college, while it’s not always easy, it can be done.

"Autism Goes to College" was made possible by support from Dr. Iris Mink, Helga and Rudy Frenner, Dean Thomas M. Smith and the UCR Graduate School of Education, and the Vernon Eady Endowment.