'Falling out of love' led to record-breaking tennis career

Tennis has been something more than a sport to Kyle McCann. It’s been his independence; the pursuit where his identity diverged from his father’s, then intersected again.

His Irish dad, Damien, was a semipro footballer — European football, i.e., America’s soccer. In his talented soccer-playing son, the elder McCann glimpsed could-have-beens. But — perhaps in part because of that —as a 12-year-old then living in Texas, McCann said he found himself “falling out of love with soccer.” 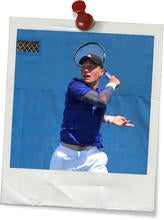 McCann forged a new path, with tennis, which neither he nor his dad knew anything about. Damien shrugged off the change, conceding to his son: “If we’re going to play this sport, we’re not going to be half-hearted about it.”

McCann was starting on the No. 1 doubles team by his freshmen year at Los Alamitos High School, a slot he maintained through his four years there. Early on, McCann saw it as his ticket. When college loomed, he watched for scouts in the grandstands, and waited.

“I thought I was fantastic, and that the big schools would come look at me,” he said. But he had his comeuppance, and was relieved when Division I UC Riverside offered a scholarship.

“I grew up a lot. I take everything a lot more seriously,” said McCann, 21, who was co-captain with Nabil Abdallah for this year’s men’s tennis team. “Riverside has fit me like a glove.”

He turns the “W” — Wilson — vibration damper on his racket upside down to an “M” — for McCann. It buoys him to think of his dad, mother Penny, and his brother and sister when playing.

In time, Damien became as much a student of tennis as his son. He got phone calls for advice before even McCann's esteemed UCR coach, Mattias Johansson.

“This is the thing we’ve had that has kept us close,” McCann said.

The spring 2019 business economics graduate will be a high-performance coach for the Southern California Tennis Academy in Long Beach this summer. His ambition is to coach a college tennis team.

“Dad would never have wanted me to play the ‘big three’ American sports,” he said. Good thing. “Tennis has meant everything to me.”