Beyond Brilliant: Cam Calkins: The secret ingredient is love

UCR Dining Services employee donates $52,000 to the Graduate School of Education, and an additional $10,000 to the R'Pantry

There are tales of the seven years Cam – full name James Cameron Calkins – spent teaching conversational English to students in Indonesia, and others about his trek up a dormant volcano on that same island while riding on a 1955 BMW motorcycle.

There are yet more having to do with personal heartbreak – a planned wedding that never materialized, and of the many years he spent in near solitude, finding refuge in the 50 books he reads per year.

And while there are plenty about the 20 years he’s spent working at the University of California, Riverside, there are perhaps none that speak of Calkins’ character more than the story of his generous $52,000 donation to UCR’s Graduate School of Education (GSOE) in 2017 as a way to support education access and honor his late father.

Calkins, 58, started working at UCR’s Dining Services division while he was pursuing a bachelor’s degree in environmental science at UCR. He graduated in 2004. Throughout that time, he took on jobs that ranged from custodial work, to picking oranges from UCR’s own citrus fields and delivering them to campus. After serving many years as a dishwasher, in 2016 he decided to become a baker, and recently he's supervising the dining room, dish room, and a group of students who work at the Highlander Union Building's dining area.

Some of Calkins’ favorite memories come from his time in the dishwashing room interacting with student workers; he’s met students from at least 43 different ethnic backgrounds. Their stories have impacted his life in different ways and reinforced one of his core beliefs: education — and college access — is important.

In May 2017, Calkins received an inheritance after the death of his father, James Edwin Calkins, a former architect in Hemet. However, Cam Calkins decided he didn’t need all the money for himself, opting to donate $52,000 to UCR’s Graduate School of Education. The gift became an endowment to fund the annual $2,000 James E. and James C. Calkins Scholarship award to a GSOE student.

Calkins said he chose the GSOE because teachers fill a huge gap in society.

“Teachers are the ones out there who really make a difference in students’ lives. Teachers basically raise the kids because parents are at work,” said Calkins, whose official job title is senior food service worker.

Calkins also decided to support the R’Pantry, UCR’s food pantry, with a $10,000 donation. He requested the money be used to offer students fresh produce on a weekly basis.

“That was the first large donation the R’Pantry had ever received,” said Devon Sakamoto, director of The Well, the unit that oversees R'Pantry. “That donation really started our commitment to keeping the pantry stocked with fruits and vegetables every week, and it made it possible back in 2017-18 when we were operating on limited, unguaranteed, temporary funding.”

Calkins was adopted as an infant by the Calkins family. He grew up in Hemet and has endless memories of his years there. “I used to catch frogs, pollywogs, and bullfrogs and bring them home and show my mother,” Calkins said. His mother, Bettye Louise Calkins, died in 2016.

Calkins traveled abroad during his academic breaks as a UCR student and also obtained a teaching certificate at the UCR Extension, where he was an English-language tutor for international students.

“I love it here, this is my world. Not just necessarily Dining Services, but the whole campus,” said Calkins, who noted his father at one point questioned his decision to remain in Dining Services, but respected his son’s choice and supported his non-materialistic lifestyle.

“What I saw in my father was perseverance,” Calkins said. “To never, ever quit; to be who you are; to establish friendships and acquaintances.”

Calkins has a quiet demeanor on the job and goes about this work with little objection. But when it comes to baking, he doesn’t like to rush, having figured out his own special recipe for the brownies and rice krispies he makes.

“I put an extra ingredient that is not in the recipe,” Calkins said. “Love.”

Now, Calkins said, he will start a new binder with notes regarding the James E. and James C. Calkins Scholarship. He also looks forward to meeting the scholarship recipients and hearing their stories.

“I lead a simple life. I don’t need so much, so I decided to share,” Calkins said. “This is a way to say thank-you. I want to thank UCR because it made me who I am today.” 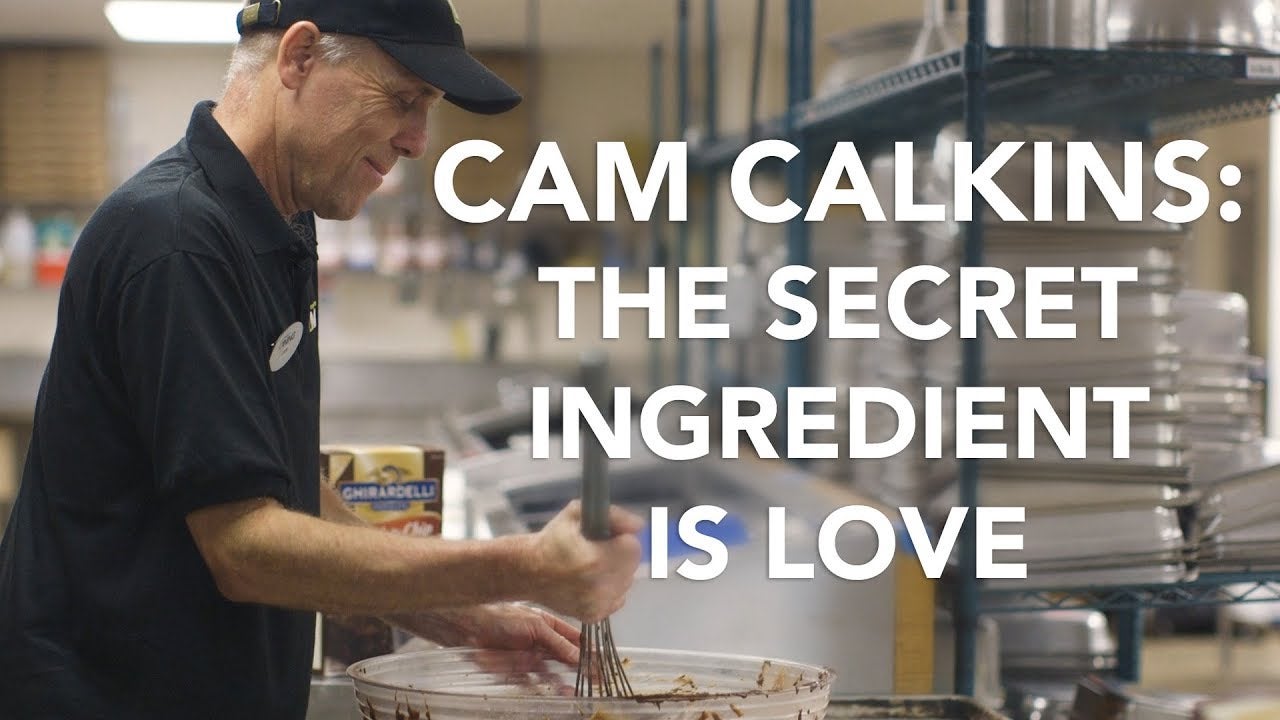 Join Cam in helping to fund scholarships and opportunities for students.