‘Autism Goes to College’ selected to screen at SXSW EDU

“Autism Goes to College,” a first-of-its-kind documentary film spotlighting the experiences of college students on the spectrum, was selected to screen this month at the South by Southwest Education Conference & Festival, or SXSW EDU, in Austin, Texas.

The film, which premiered in April 2019, was directed and co-written by Erik Linthorst ’94, who earned his bachelor’s degree from the University of California, Riverside, and executive-produced by Jan Blacher, a distinguished professor in UCR’s Graduate School of Education.

It has earned special designation as part of SXSW EDU’s “crossover programming,” which bridges SXSW EDU to the main SXSW festival, and will be shown on March 12 at 1:30 p.m. Now in its 10th year, SXSW EDU precedes SXSW and promotes innovation in learning across four days of discussion sessions, workshops, film screenings, and other learning opportunities.

The film’s SXSW EDU screening comes at a critical time for students nationwide: college admissions season. Viewers will quickly learn, however, that this period is especially fraught for students on the spectrum — and for their parents and professors too.

Blacher, who studies the impacts of autism in both family and school contexts, said the “Autism Goes to College” screening appears to be the only event on the day’s program to also feature a Q&A with members of the cast and production team.

“Erik and I are bringing the team of students with us to Austin,” she said. “The synergy that has developed among them at post-film Q&As is almost as entertaining and insightful as the film itself. I have seen audiences howling with laughter and teary-eyed — but we never know what is going to happen. That is, after all, the nature of autism.”

The film offers a rare window to the experiences of the growing population of students who, despite their autism diagnosis, are now graduating from high school and opting to go to college.

It introduces viewers to Guillermo, Jasmine, Caroline, Jonathan, and Aniella, five Southern California students who agreed to have their experiences chronicled as they were admitted to and enrolled at UC Riverside; California State University, Long Beach; Cal State Fullerton; and Mt. San Jacinto College.

Those experiences can vary dramatically, Blacher said, from weighing the decision to disclose a diagnosis and seek on-campus services to balancing academic and extracurricular loads and managing new relationships with roommates and friends.

The students’ stories — along with those of their parents, siblings, professors, and on-campus counselors — also shed light on the efforts of colleges to better accommodate increasing levels of neurodiversity on campus.

For all students, the independence required for college success puts greater demands on executive functioning, or organizational, skills and social competencies — two areas youth with autism often lack, Blacher said. As a result, colleges have begun to launch targeted resource programs for these students.

Some more proactive universities, such as UCR, are helping faculty members develop alternative ways for students to fulfill assignments that meet the requirements of those faculty members’ classes while allowing students on the spectrum to demonstrate their potential.

As the founding director of SEARCH, the University of California’s first autism resource center focused exclusively on family needs, Blacher has worked with UCR faculty members and staffers who seek individualized support to better educate and accommodate students with autism.

She noted that in recent years, improvements in early-intervention methods have led to higher numbers of students with autism going on to attend college.

To better understand the needs of this population, Blacher and a team of doctoral students launched “Autism 101” several years ago. They started by conducting a campuswide survey to gauge students’, staffers’, and faculty members’ knowledge of autism, and later assessed faculty members’ views of autism and their role in serving students with autism.

“However, given the right tools, professors can play a leading role in driving successful outcomes for students with autism,” she said. “We consider this documentary the first large step toward educating faculty around the country.” 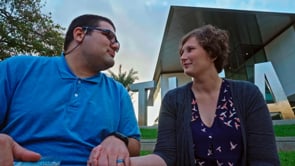 Since premiering last spring in Santa Monica, “Autism Goes to College” has been screened at more than 15 colleges and film festivals around the country, with additional screenings on the way. Learn more here.