As the Federal and state governments rush to try and offset the impact from massive surges in COVID-19 related unemployment, the rapid and almost frenzied implementation of policy has left some groups at greater risk of not receiving pandemic-related aid. A new analysis, released today by the UCR School of Business Center for Economic Forecasting and Development, takes a deep dive into the neighborhoods and communities of Riverside County and finds that a significant proportion of workers there are unlikely to receive unemployment insurance funds from the Federal CARES Act. 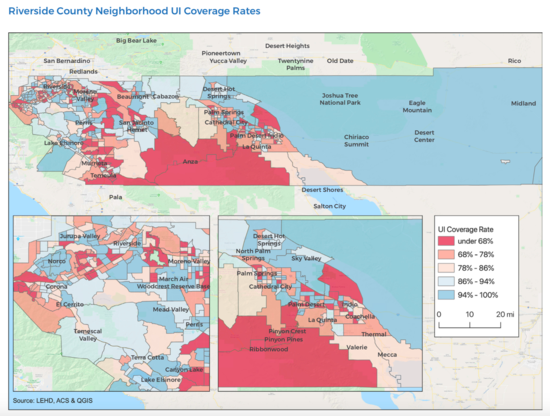 Based primarily on two datasets from the U.S. Census Bureau, the analysis identifies three main clusters in Riverside County where workers are at high risk of receiving the fewest benefits from the CARES Act – the Palm Desert area, the northern part of Hinda (within the City of Beaumont), and the southern part of Temecula. The cluster with the most concentrated risk is the Palm Desert region, where Cahuilla Hills has a low 43% unemployment insurance coverage rate and Spanish Walk has just a 50% coverage rate.

A particularly significant finding is that census tracts with the highest rates of unemployment insurance coverage are adjacent to areas with the lowest rates. For instance, Palm Desert’s northern and western areas had the highest (100%) coverage rates in the County, yet border areas in that city with the lowest rates. Additionally, at-risk clusters of workers span both the rural and urban regions of the County. At-risk urban areas include locations such as La Sierra, areas around Corona, and the northern and eastern parts of the City of Riverside.

Demographically, the findings are varied but the analysis identifies a number of clear trends:

“The analysis really illustrates deep nuance in terms of who’s more likely to fall outside of unemployment insurance and CARES Act related aid in Riverside County,” said James McKeever, Research Associate at the Center for Forecasting and one of the report’s authors. “We find varied regional and demographic inequality existing in very close proximity, which is a critical detail for policymakers to understand in order to develop precise, effective policies that direct benefits to residents who are least likely to receive Federal funds.”