In the past seven years, the six-year graduation rate has climbed more than 11 percentage points; UCR's rate is in the top 15% among U.S. universities

UC Riverside’s six-year graduation rate — considered a leading measure of higher education excellence — has realized a new record. According to new numbers from UCR’s Office of Institutional Research, among freshmen who entered UCR in 2014, 77.3% graduated by 2020. That breaks the previous record of 76%, set last year.

As notable is the near parity in graduation rates between underrepresented minorities, or URMs, and nonunderrepresented minorities at UCR. URMs include Black, Latino, American Indian, and Pacific Islander students. From the 2014 cohort, 81.8% of Asian students graduated by 2020; 78.4% of white students; 78.1% of Black students; 73.7% of Latino students and 62.5% of American Indian and Pacific Islander students. 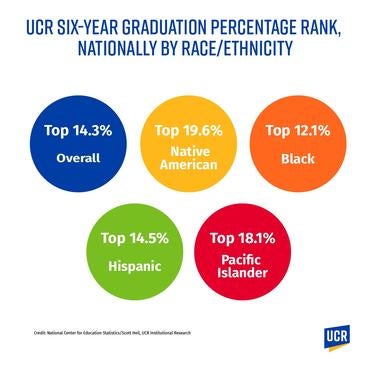 “UCR is within the top 15% of institutions in the United States in terms of its overall graduation rate, and is especially strong at graduating students of diverse backgrounds at near parity,” said Scott Heil, UCR’s assistant vice chancellor for Institutional Research. “Other universities looking to raise the graduation rates of their underrepresented students could do well to follow UCR’s lead.”

UCR is also in the top 13% of universities in terms of Black students graduating in six years; and the top 15% graduating Hispanic students, according to comparisons calculated by the Office of Institutional Research.

In the past seven years, the university has increased its six-year graduation rate by more than 11 percentage points, according to data Office of Institutional Research data.

The surge in graduation rates runs parallel to the 2013 creation of a UC Riverside Graduation Rate Taskforce that produced 37 recommendations on how to improve graduation rates. Many of those recommendations have since been implemented, including limiting undeclared major status to one year; offering the most critical and high-demand courses more frequently, including during summer session; and “front-loading” the freshman fall academic calendar with engaging classroom lecturers.

“We have been setting new student success records every year, and it’s a testament not only to a uniquely hard-driving student base, but also a determination among our faculty and staff that it’s everyone’s job to ensure our students graduate and move on to rewarding careers,” UC Riverside Chancellor Kim A. Wilcox said.

The new numbers from the Office of Institutional Research also show four-year graduation rates for UCR at 62.4%, tying the record set two years ago. The most recent national four-year completion rate available from NCES is 45.3%.

The achievements come as UCR set a new enrollment record in fall 2020, with 26,434 total students. Among those are 22,687 undergraduates. For fall 2021, a record 52,263 freshman applications were received. In the past 10 years, the campus student population has grown by more than 20%.