Store and online shopping expected to be robust

As the nation’s retailers prepare for upcoming Black Friday and Cyber Monday sales, they expect their holiday revenues to grow moderately over last year. The National Retail Federation has forecast a 6% to 8% increase to $942.6-$960.4 billion in sales. This growth would follow last year’s surge of 13.5% that occurred as pandemic-weary consumers eagerly returned to malls and shopping centers. While inflation is expected to limit holiday spending this year, it is being offset by job growth, rising wages, and accumulated savings, according to the Retail Federation. The shopping binge also will be a crunch time for thousands of lower-wage retail and warehouse workers in the Inland Empire.

How will our high inflation rates affect Black Friday sale prices? Will consumers get a long-awaited break in pricing?

Balachander: Pricing is usually driven by the willingness of consumers to pay. In a supply-constrained environment, retailers are not likely to offer significant discounts, knowing that they can get away with higher prices because of an imbalance in favor of supply and because of consumer acceptance of higher prices.
Thornberg: Consumers are pushing inflation and that is because they (the federal government) fire-hosed an insane amount of unnecessary cash into the economy during the course of the pandemic. They functionally overheated consumer demand and consumer demand remains overheated. My favorite statistic right now is that, prior to the pandemic, all American households were holding on to less than a trillion dollars. That's money sitting in checking and savings accounts -- just cash on hand. Right now, that number is 4.6 trillion. . . You hear the moaning and groaning. This is just sticker shock. This is people going, “Hey, that price is higher than it was last year.” And nobody's acknowledging the other side of it, which is, you're buying it anyway.

Have high prices contributed to a surplus of in store inventories that retailers will want to unload on Black Friday and thus bring down prices?

Balachander: There is anecdotal evidence that the change from a pandemic to a COVID-endemic environment and increased return to normalcy has changed the type of products demanded by consumers. Consequently, retailer inventories may be high for the wrong products but not for in-demand products.
Thornberg: There's no doubt that there are excess inventories out there. For example, Target and Walmart were acting like no one was ever going to leave their bedrooms again and we were all going to work at home. And lo and behold, people got over the pandemic and went back to living their lives. . . If you're in the market for pajamas this year, you're going to get some good deals. If you're in the market to buy your wife, for your 25th Christmas together, that wonderful Lexus with a big bow, good luck to you. You’ll never get it in time for Christmas. There's still no inventory for cars… You should see the numbers on computer equipment. They are through the roof right now. They just can’t produce enough.

As the pandemic winds down, will brick-and-mortar retailers have an advantage over online retailers?

Balachander: Yes, brick-and-mortal retailers will become relatively more relevant with the winding down of the pandemic. There is also an overall trend, particularly among larger online retailers, toward bricks and clicks, whereby they are supplementing their online presence with a brick-and-mortar presence.

Thornberg: We understand there's a value to the physical retail experience. That hasn't changed. And it's only logical that that will play some role in this consumer chain at some level, but people aren't going to back off buying stuff online. The average household had 166 packages delivered in 2021. That's just how you do it.

Are price-wary consumers expected to dampen the hopes of retailers?

Balachander: Consumers at the very end of the income scale are likely to have become somewhat price-wary but all consumers are also faced with some lingering supply issues.
Thornberg: The only reason you would see prices coming down during the holiday season is if sellers thought that consumer demand was going to slow. And it's not. I anticipate this to be a nice frothy Christmas for retailers. 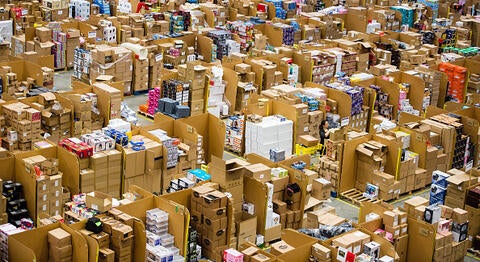 What will Black Friday and Cyber Monday mean for the thousands of Inland Empire residents who work in Amazon fulfillment centers and other warehouses that house our retail goods?

Balachander: It will be a busy time for warehouse workers.

Thornberg: The biggest problem business has right now is not a lack of demand. It's a lack of workers. (Thornberg added retail and warehouse workers will benefit from higher wages, though many are making about $16 an hour.)  Earnings among lower paid, lower skilled positions are rising faster than they are for highly paid, highly skilled positions right now.

Reese: Black Friday and Cyber Monday produce a surge in demand for goods purchased through Amazon for home delivery. Previous analyses of Occupational Safety and Health Administration data have shown that workplace injuries tend to increase among Amazon warehouse workers during such periods as many of these workers, who are poorly paid, are engaged in physically grueling work, working long hours and overtime, and pushed to work quickly, often under electronic surveillance, to meet unreasonable work quotas or be terminated.

Gudis: For those who work at jobs in warehouses and distribution centers, we can expect that their hourly salaries have not kept up with inflation, and that the costs of survival, in terms of increased expenditures for rent and food, may limit their own Black Friday consumption patterns and that of other working people.  We might expect to see the Inland Empire—as we have in the last few decades—continue to function as an area where goods flow swiftly through the region, but profits do not necessarily settle into the homes and pocketbooks of residents or the municipalities that have helped transform the region into a hub for the distribution economy. In other words, Amazon and Walmart might benefit, but will those working in their distribution centers or retail stores (also benefit)?


Retailers and warehouse operators reportedly are having trouble finding enough workers to get through the holiday season. What can these employers do to make these jobs more attractive and equitable?

Thornberg:  You could pay workers more. Labor shortages were happening before the pandemic. It's called demographics. Boomers are retiring. They didn't have enough kids. Now, we don't have enough workers. It was way back under the Reagan generation that our immigration system got permanently distorted. So, here we sit today without enough people.

Reese: Retail employers and warehouse operators who seek to make their jobs more attractive should provide living wages, good benefits, and workplace safety, and respect workers' right to organize, form unions, and take action so that they can have a greater voice at work. In particular, Amazon should address the demands of the Inland Empire Amazon Workers United for a $5 per hour wage increase, greater workplace safety, and an end to employer retaliation against labor activists (#IEAmazonWorkers).

Gudis: For one, seasonal warehouse employment is typically without benefits or a path of upward mobility. So many of the students in my undergraduate classes work in warehouses, and move from one job to the other, chasing the next 50-cent hourly boost, especially during the holiday season. But when they graduate and want to stay in Riverside or San Bernardino Counties, do their options change? Can we build more diverse pathways to employment beyond warehouses, and beyond the technologies of logistics, especially in the face of Amazon’s recent and unprecedented layoffs of 10,000 corporate and tech jobs?* What might renewable, sustainable, and diverse job growth look like, beyond the temporary and remarkably wasteful gains of Black Fridays and Cyber Mondays? These manufactured shopping holidays hit the worst notes in terms of inequities, gross patterns of waste, and exploitation of both resources and labor, not to mention the other environmental impacts of the global supply chain.
* https://www.nytimes.com/2022/11/14/technology/amazon-layoffs.html