With the help of donors and alumni, a 100-year-old Steinway piano found its way to UCR.

Moving a piano is no easy feat, but a group of UC Riverside alumni and supporters have collaborated to relocate a grand piano from a home in Riverside to the Arts Building on the UCR Campus.

The piano, a 1903 Steinway grand, is the gift of Robert Earl Brown, a lifelong pianist and music teacher. While living with David Hawks ’82 at his home in Riverside, Brown developed dementia and was moving to Massachusetts, where his sons lived. Meanwhile, Hawks planned to sell his home and move closer to his sister and her husband, Judy White ’68 and Dan White ’68, who live in Arizona. In response to these transitions, the piano needed a new home, too.

According to his son Philip, Brown started piano lessons at the age of 5 and played for his church before he turned 13. After studying music at Olivet Nazarene College in Illinois, he taught in the public schools in Princeton, New Jersey. Later, he accepted a position teaching piano and music at Eastern Nazarene College in Quincy, Massachusetts and eventually became head of the school’s music department. Over the years, Brown directed performances of Handel’s Messiah, became director of the Quincy Symphony Orchestra for more than 20 years, and was the organist and choir director at the college church and later, the First Baptist Church of Wollaston in Quincy. He was also founding music director of the Quincy Choral Society and played area concerts. With a former student serving as conductor, he performed Beethoven’s 5th Piano Concerto with the Kankakee Symphony Orchestra. 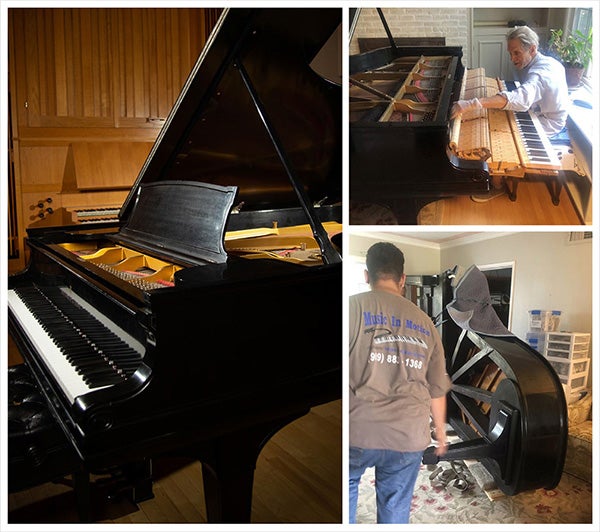 In 1992, Brown retired to Palm Desert, where he taught music part-time at the College of the Desert while also serving as accompanist and orchestra director at the McCallum Theatre. He also gave private lessons on the piano he would eventually gift to UCR.

Philip Brown said he believes his father acquired the piano in the early 1970s. At that time, the piano needed costly repairs and Eastern Nazarene College had plans to dispose of it. Brown volunteered to take it, then spent many years saving to have it rebuilt. When he moved to Palm Desert, the piano moved with him. And, when he moved to live with Hawks, the piano moved again. Even as his dementia worsened, Brown continued to play.

A renowned entomologist, Hawks formerly worked in UCR’s Department of Entomology. Known for his research with beetles, his photographs of scarabs have been featured in National Geographic magazine. Hawk notes that both he and Brown loved the song “Somewhere Over the Rainbow” and recalls Brown hammering out the tune on the piano.

When UCR development director Austin Quick ’15, M.Ed. ’17, learned of a possible piano donation and confirmed that the UCR Department of Music needed it, he faced the challenge of finding resources to both move and maintain the instrument. Fortunately, Judy and Dan White donated funds to pay for the move. Then,  UCR Foundation Board of Trustee member David Hadley ’72, M.S. ’73, and wife Cheryl Hadley ’71, committed to fund restoration and ongoing maintenance for both Brown’s piano and the department’s old piano.

According to Rogério Budasz, chair of the music department, Brown’s piano now lives in the Chamber Music Room of the arts building where it will “fulfill our mission of providing high-level music instruction using high-level tools.” In an email to Hawks, Budasz wrote, “The piano always plays an essential role in all activities at room 159, and we expect this Steinway piano to be a very conspicuous and audible presence there for many years to come.”