U pon meeting UCR physicists Allen Mills and Harry Tom, you may think the pair would rarely be seen in the same room, given how divergent their personalities are. The introverted Mills is soft-spoken and shy; his wife jokes he has “no personality.” Tom, on the other hand, is a bubbly extrovert, whose bursts of laughter can fill any room. And yet these two scientists have come together to work on an experiment and, in the process, forged a friendship that has lasted decades.

The pair acknowledge they make an “odd couple.” Mills, 82, was trained in preparatory schools and attended Princeton and Brandeis. Tom, 66, attended a public school in Los Angeles, then Harvard, and later Oxford and UC Berkeley for graduate studies. Mills is an expert on antimatter whose work focuses on positronium, a hydrogen-like atom built from an electron and an antimatter positron. Tom specializes in optical and laser physics.

Prior to UCR, they both worked at Bell Labs in New Jersey for several years, Mills starting in the mid-1970s and Tom in the mid-1980s.

“I had the extraordinary luck to meet Allen on the first day of my two-day interview at Bell Labs,” Tom said. “I had read an important paper he had coauthored with Steve Chu, Nobel laureate and the 12th U.S. Secretary of Energy, that described their landmark experiment on using positronium to test a theory called quantum electrodynamics.”

Tom left Bell Labs in 1992 to join UCR, but Mills stayed behind. When the lab closed a few years later, a colleague suggested Mills reach out to Tom. Fortunately for Mills, UCR was growing its faculty at the time and in need of more physicists. Tom helped recruit Mills in 2001.

“Allen was an extraordinary hire,” said Tom, who began collaborating with Mills in 2006. “It’s hard to put it in perspective because Allen is so understated and a bit dry in how he presents his work. But some of us see the brilliance and depth, and at Bell Labs he was known as the ‘experimentalists’ experimentalist.’ He’s just so smart and creative and makes connections between diverse subjects easily. Together we have been able to resonate and accomplish the most ambitious of projects.”

Mills and Tom are using positrons to study positronium atoms. Such experiments can shed light on the fundamental properties of charged particles and how they interact, and may help scientists probe further into why asymmetry exists between matter and antimatter in the universe. Mills and Tom are testing quantum electrodynamics, or QED, which describes how charged particles and light relate to each other.

Each particle of matter has a corresponding “antiparticle”; these antiparticles are what compose antimatter. Electrons are negatively charged particles that surround every atom’s nucleus. Positrons are antiparticles with the same mass and magnitude of charge as an electron, but exhibiting a positive charge. They are generally short-lived because they tend to combine quickly with electrons. Positrons have applications in developing more accurate Positron Emission Tomography, or PET, scans — an imaging technique often used to detect early signs of cancer, heart disease, and brain disorders — as well as in fundamental physics research. They are especially of interest to plasma physicists and are used in studying the electronic structure of metals, detecting defects in solids, and measuring the properties of surfaces. By storing positrons in a “magnetic bottle,” physicists like Mills have been able to prolong their life and accumulate millions of them at once.

Using an elaborate apparatus Mills and Tom have painstakingly assembled, they first generate positrons from a radioactive form of sodium. They then empty the positrons out of the magnetic bottle and beam a stream onto a small spot on a target surface comprising a thin piece of porous silica. There, the positrons combine with electrons to spontaneously form a high concentration of unstable positronium atoms. The newly formed atoms quickly take up residence in the pores of the target and begin to collide with one another and annihilate — a process in which the positron and electron disappear, producing gamma radiation.

Before annihilating, the positronium atoms can be excited internally to higher bound orbital states. The laser built by Tom as part of the apparatus precisely measures the excitation. Tom explained that if the positron and electron rotating stably around each other can be likened to Earth orbiting the sun, then a higher stable orbital state would be moving from Earth’s orbit around the sun to, say, Mars’ orbit.

“The atom that is typically studied in such experiments is hydrogen, which has one proton and one electron,” Mills said. “The 1S-2S excited state of the electron in hydrogen has been measured very precisely. Positronium, on which we are experimenting, is a simpler atom by comparison, the positron being simpler than the proton. We would be very thrilled if we meet our goal to measure the 1S-2S excited state of the electron in positronium 100 times more precisely than Steve Chu and I measured 30 years ago. It’s a tough challenge, however, and nobody has repeated it.”

Had Bell Labs not closed in the mid-1990s, UCR might not have gained this unique pair of physicists. Tom describes Mills as the quintessential scientist and role model.

“He is the go-to person who knows all the details,” he said. “His interest in science is pure and his ideas are out of the box. Most often, he comes in with an impossible research question. At first, we might both laugh because to answer the question would require nearly impossible measurements. But then, an hour or so later, we find ourselves asking, ‘How about this approach or that one?’ This is the best part of our jobs: We are paid to be creative researchers.”

The Positron Lab that Mills set up soon after joining UCR is where brilliant ideas take shape. Currently, six graduate students and two postdoctoral researchers use the lab as well. In what resembles a messy, jampacked warehouse, you get from one place on the floor to another by a careful walk through a maze of heavy equipment, much of it covered in foil. The high-ceilinged room is festooned with cables that drop to the floor in a crisscross of bright colors. If you are not stepping over equipment to get somewhere, you are ducking under a cable or pipe that connects one apparatus to another. There’s even a drill press in the corner, lost in a hodgepodge of wires and tubes. The apparatus that Mills and Tom use for their experiment occupies more than half the lab space. It’s where the positrons are produced and eventually fly through the laser beam Tom developed.

“If the laser beam is tuned to the right frequency, the excited positronium atoms survive long enough to drift to a detector,” Tom said. “This is how we measure the exact frequency of atomic excitation.”

By their own admission, neither Mills nor Tom could have gotten as far as they have had they worked independently. Like a proton and electron coming together, they have created far more than the sum of their individual contributions.

“I used to do experiments that would take three to five years, but thanks to Allen, I’m now doing work that takes 10 to 15 years,” Tom said, bursting with laughter. “When I tell my colleagues, whom I have known for 30 years, what I am now working on, they are in shock and shake their heads and say, ‘Harry, are you trying to outdo Steve Chu?’ Should that ever happen, it would all be due to my collaboration with Allen on an experiment that is truly world class and a twist of fate that brought us to UCR.”

Not surprisingly, Mills and Tom have different working styles with their students. Mills rarely reads or sends lengthy emails and might gently command a student in the lab to produce more positrons. Tom, however, is known for sending his students 20-page-long emails that include detailed instructions on how to proceed in a crisis. What’s common to them is the extremely high bar they have set for themselves and their students.

“The two of us together bootstrap ideas to make the impossible possible.” — Tom

“We aren’t so interested in a quick paper or a quick grant but obsessed instead with ultrahigh impact, which comes with ultrahigh technical difficulty and risk,” Tom said. “The two of us together bootstrap ideas to make the impossible possible. Our experiments are 10-year visions, not three-year or five-year ones, and are aimed at the most fundamental aspects of antimatter physics that a lab environment can address.”

Mills and Tom want more UCR students to be excited about the kind of experiments they are doing as well as more researchers to take their work to a larger scale. Bigger experiments could make enormous amounts of positrons at once and help develop fusion power generation as well as gamma-ray lasers, with applications in medical imaging, spacecraft propulsion, and cancer treatment. It also could help explain how the observable universe ended up with so much more matter than antimatter.

“For this to happen, we need to think big,” Mills said. “We are not thinking big enough.” 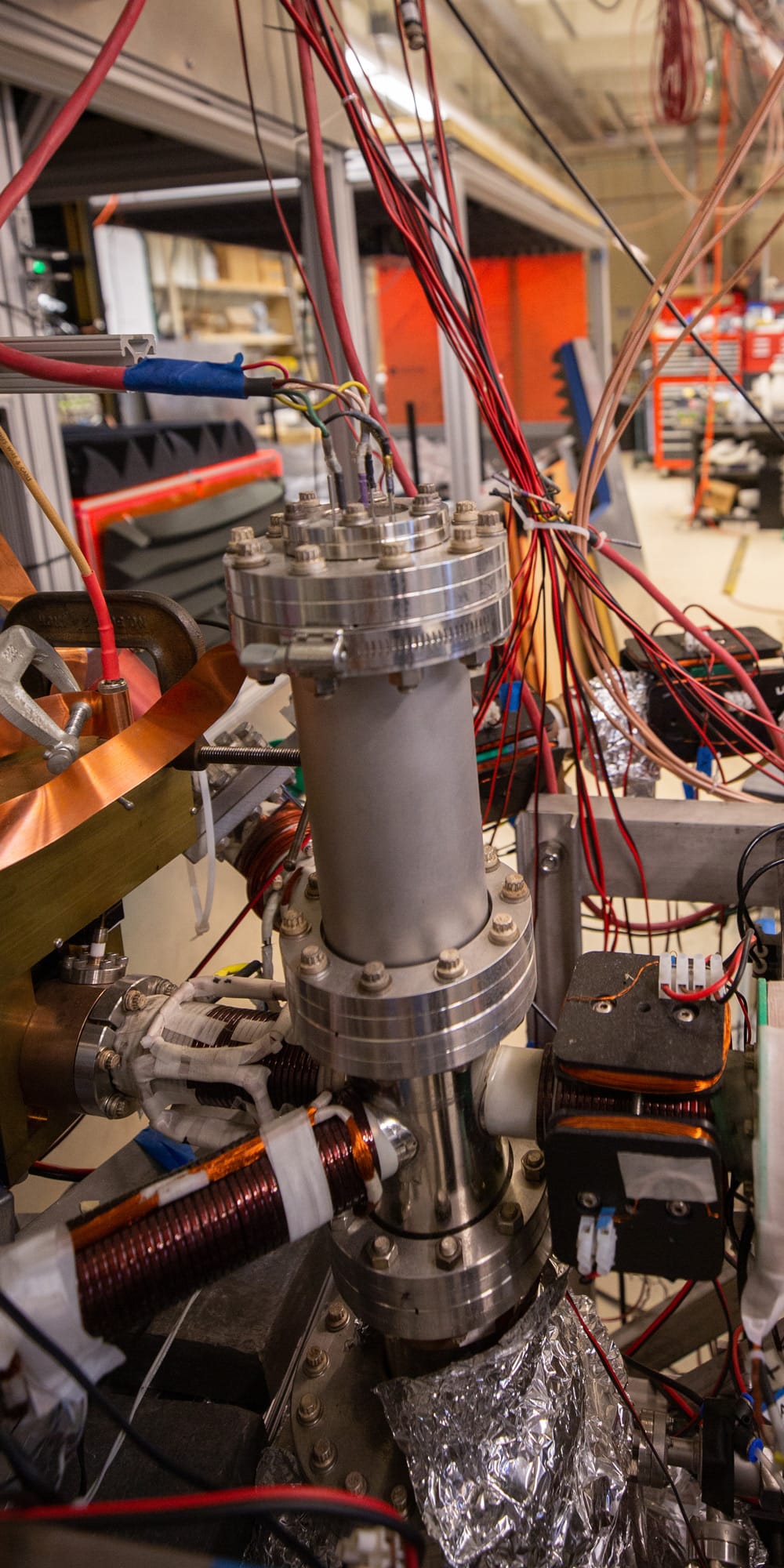