After a decade with the Red Cross, Russ Paulsen is now leading the charge against Alzheimer’s

he 6.9 magnitude Loma Prieta earthquake rocked the San Francisco Bay Area in 1989, causing more than $5 billion in damages and taking 67 lives. Russ Paulsen ’89 counts himself as fortunate it didn’t take his, and he was forever changed by helping in the relief effort.

“I felt I had to do something,” he said. “I found the Red Cross near the freeway making food for people and I helped for a few days. The Red Cross asked me to start volunteering. I ended up thinking this could possibly turn into a career path — and it did.” 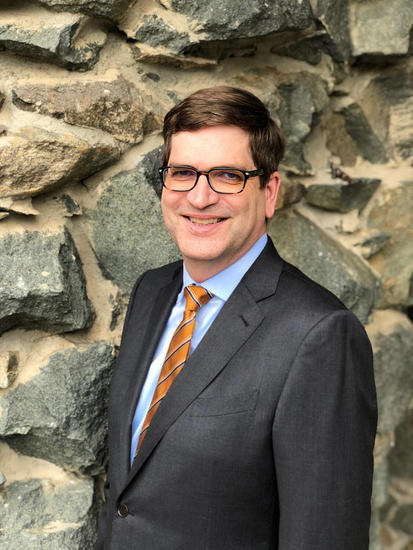 Paulsen, who graduated from UCR with a bachelor’s degree in political science, worked for the American Red Cross in various roles for more than a decade, leading some of the largest disaster response and recovery efforts in the organization’s history. He designed the recovery program after Hurricane Sandy in 2012, served on the management committee for the September 11 Recovery Program, and led the $200 million recovery program after Hurricane Katrina in 2005. The response for Katrina, which damaged or destroyed 350,000 residences from Texas to Florida and resulted in over 1,800 lives lost, marked the largest long- term recovery effort the Red Cross had ever undertaken.

While serving as executive director, community preparedness and resilience, for the Red Cross, Paulsen led the launch of a successful long- term national campaign on fire prevention at home. The campaign has since made 900,000 high-risk homes safer through smoke alarms and fire escape plans and has saved more than 800 lives. Additionally, more than 1.6 million kids have learned about fire safety through classroom presentations and an award-winning videogame designed by his team.

“Early on, Boy Scouts we partnered with visited a woman’s home,” he said. “She fell asleep with the oven on, but the smoke alarm went off and she was OK. Firefighters will tell you one of the leading causes of fire-related death is a scenario like that.”

Paulsen, who served as editor of The Highlander student newspaper as an undergraduate, said UCR was critical in molding him into the person he is today.

“The Highlander was actually my first chance to be a leader and I was much better at leading later because the school allowed me to learn from my mistakes,” he said. “They weren’t out to make you feel afraid to do something wrong because mistakes are how you grow.”

Paulsen’s political science education also serves him in his career, he said, not only through its lessons in understanding government and systems, but also ethics. The late professors Francis Carney and John Stanley were particularly influential for him in this regard, he said.

Currently, Paulsen serves as the chief operating officer of the Washington, D.C.-based nonprofit USAgainstAlzheimer’s, where he helps lead the fight against Alzheimer’s, a neurodegenerative disease affecting more than 6 million Americans. A key success for the organization has been in getting research backing, he said.

“We’ve been a part of getting the funding of Alzheimer’s research north of $3 billion,” said Paulsen, who assumed the role in 2019. “Encouragingly, more doctors are going into the field and are taking care of patients.”

USAgainstAlzheimer’s has also started initiatives such as BrainGuide, a web and phone system that allows for cognitive screening.

“It can help assess what is normal aging in a person or something to talk to a doctor about,” Paulsen said, adding that roughly 160,000 people have completed a questionnaire through the system thus far.

Paulsen is optimistic about winning the fight against Alzheimer’s but emphasizes the importance of continued education.

“Many people have the misconception that having it is inevitable as you age, but there are things you can do to lower your chances of getting it,” he said. “Keep your blood pressure from getting high, exercise, and — one many don’t realize — sleep. Sleep is like putting your brain through a cleansing rinse cycle. Part of our job isn’t just to support research to help those who have Alzheimer’s but stop as many as possible from getting it. It’s my honor to be a part of that mission.”