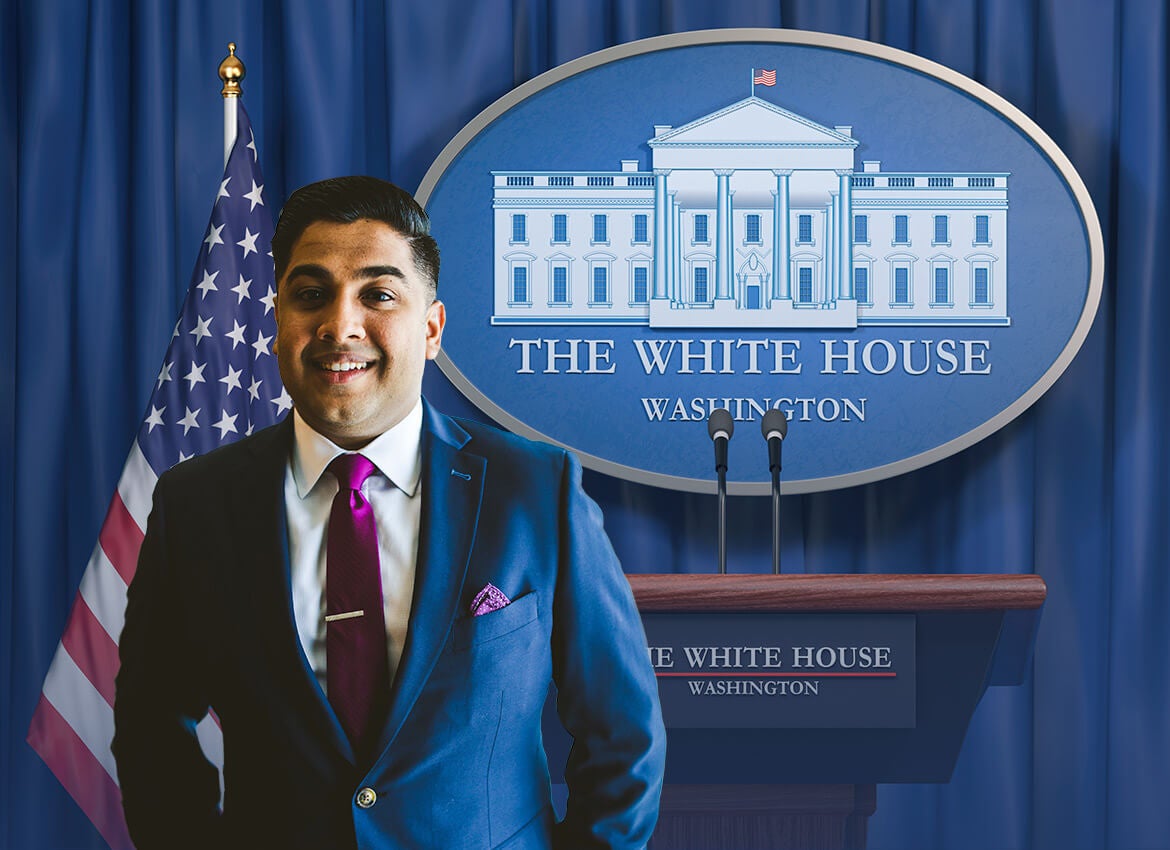 JUST ANOTHER DAY AT THE OFFICE

In some ways, Vedant Patel’s office job is much like any other. Endless emails and phone calls. Rushed lunches and coffee breaks. Back-to-back calendar entries. But when Patel refers to the president, it isn’t the leader of a company — it’s the leader of the United States. Patel ’12 is assistant press secretary and spokesperson for President Biden and the Office of the Press Secretary, a position he has held since Jan. 20, 2021 — the beginning of the Biden Administration.

Patel’s interest in government and political campaigns began in high school, and it became the springboard for his work supporting multiple members of Congress throughout his career. Before serving in his current role, he worked on the Biden for President campaign, first as the Nevada and Western primary states communications director, then as regional communications director. In December 2020, White House Press Secretary Jen Psaki gave him the fateful call that would change his life forever — and he credits UC Riverside with helping him achieve this dream.

Although Patel’s degree is in biology and he once thought his career path would lead to medicine, he was always civicminded, and it was political science electives at UCR that helped give him a base for what he does today. But what, exactly, does he do? For Patel, a typical day looks something like this:

After waking, Patel’s thrown right to the dogs — his own. Patel’s 13-year-old Maltese-poodle mix and 1-year-old mini poodle eagerly anticipate their morning walk. It’s a good way to get ready for a big day ahead, he said. And most days are big days. After, he’ll catch up on last night’s emails, focus on Twitter feeds and early morning cable, and get a sense of what will be the major stories of the day his team will need to focus on.

Now is time for another walk — to the White House. A roughly 25-minute stroll frequently becomes nature’s office, as Patel often takes a 7:30 a.m. phone call with other members of the press team to talk through topics of interest percolating for the day. Other days, the walk may just involve listening to NPR. The city is peacefully quiet to him at this time, besides a coffee shop sprinkled here or there, with few others bustling about. Lafayette Park, normally alive with people, is a calming presence as he nears work, he said.

Patel enters the White House. It’s inspiring just to walk in, he said. He remembers years ago doing an abbreviated tour of the White House, and, if you told him then that this would one day be his office? “I wouldn’t have believed you,” Patel said.

But there’s little opportunity to focus on the scenery as he heads straight to work gauging what reporters are talking about that morning. Soon after taking office, for example, President Biden addressed the United Nations General Assembly, during which he made a major announcement about climate change, an issue in Patel’s portfolio.

“It’s just about focusing on any stories emerging around the announcement, what reporters and correspondents are talking about relating to it, and any specific questions we’ll want a policy expert from within the administration to address,” Patel said of his duties as part of the press team.

On some days, White House press briefings are held around now. Psaki takes to the podium to field questions and, although Patel won’t be saying anything, he’s listening intently. Some questions may not have an immediate answer, and Patel often jumps into action, making a slew of calls and firing off emails to get the requested information for reporters. In September, for example, the White House made an announcement related to combating extreme weather and heat events — including wildfires that had been raging in California at the time.

“There were follow-up questions about the scope and technical aspects as well as how some of these things would be implemented, so we worked with individuals from the Climate Policy Office, Department of Labor, and Environmental Protection Agency to ensure that we were following up on these questions as accurately as possible,” Patel said.

This will be at his desk most days. It could be a quick jump to the White House Mess to pick something up, and it’s whenever there’s a free moment — a valuable thing to find.

Often this time means a major dive into follow-ups or getting a jump-start on other inquiries from reporters.

“A week or two ago during a press briefing, a White House reporter asked a rather in-the-weeds immigration policy question,” Patel said, offering an example. “I didn’t have that exact information in front of me, so we reached out to the staff at Department of Homeland Security and Domestics Policy Council to see if there was an update or anything we were in a place to share publicly at that point.”

If he has a chance and needs a second wind to power through the rest of the day, Patel may turn to coffee or tea, possibly chai.

Around now is when Patel’s team turns its attention to journalists’ deadlines. If there’s a reporter working on a story on deadline for that evening, it’s time to make sure all relevant information has made its way to the reporter and that there is nothing else he needs to convey to accurately reflect the Administration’s perspective. And, of course, he’s already thinking about tomorrow’s potential stories.

“For example, this week we will be rolling out the Administration’s action plan around lead pipes and paint in homes and schools. I have draft versions of talking points, a possible run of show for a press briefing call, and an iteration of the fact sheet that I intend to finish work on tonight,” Patel said.

Patel’s day at the White House usually ends around now, and it’s another chance to go for a stroll — this time back home — and enjoy the energy of our nation’s capital and the evening air. When he gets home, he often enjoys a relaxing dinner with his wife. But it’s not necessarily the end of work, as emails, texts, and phone calls may need to be answered. Patel doesn’t mind, however, and sees the opportunity to serve his country less like work and more like a calling.

As the end of a busy day at the White House nears, his dogs aren’t impressed. They’re not interested in political credentials; they need a walk. And so Patel will end the day as it started, then call it a night around 11 p.m. — before waking up and happily doing it all over again.

The UCDC Program offers undergraduate students an opportunity to combine course work, field research, and professional experience while living with other UC students in the heart of Washington, D.C. They can study and participate in federal government, advocacy, international organizations, media, science policy, and arts internships.

Your gift to support the UCDC Program-UCR Student Support Fund makes this experience available for more students. Give online at donate.ucr.edu/Winter2022.