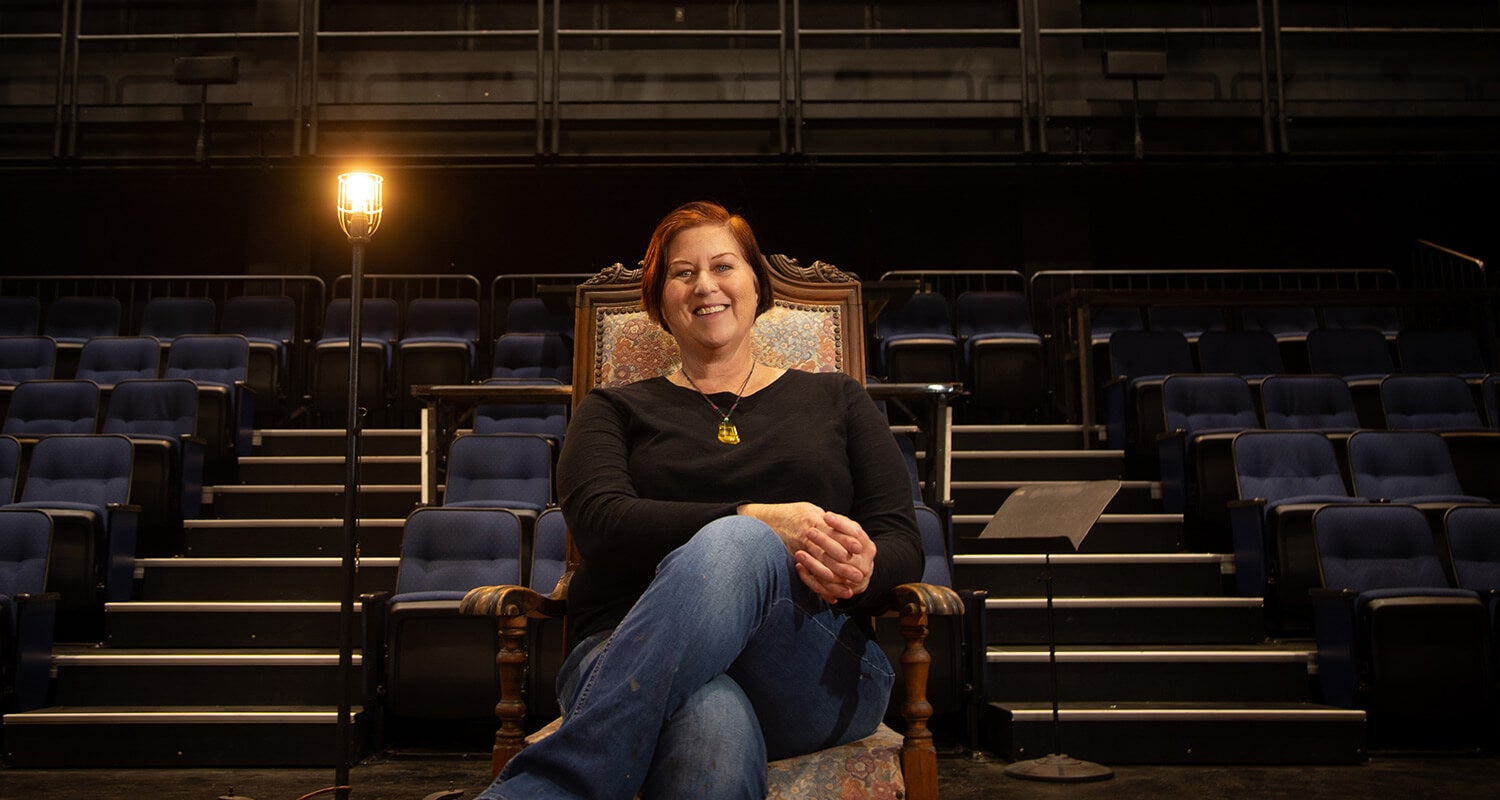 or almost three decades, Kerry Jones ’84 has helped create dozens of elaborate sets for the slate of plays and films produced by the UCR Department of Theatre, Film, and Digital Production each year. As a scenic artist and properties designer, she is responsible for set painting, set dressing, and props, and has worked on nearly every production since she first joined the department.

“The first show I painted for UCR was in 1995, and I’ve painted every show there since, except for one — I’ve only missed one,” she said, noting a trip to Europe was the reason.

Jones, a UCR alumna who received a bachelor’s degree in fine art and art history, would frequent shows with her parents growing up, but only became involved in theater after graduating college. She started working with community theater groups and eventually met a scenic designer who worked at the California Theater in San Bernardino. With her background in painting, Jones was able to become his assistant and learned the techniques of set design. She said painting sets allowed her entry into theater, something she had always loved, but hadn’t pursued in college.

Jones had been working with the scenic designer and acting in local theater for three years when she heard about an opportunity to audition for a play at UCR. At that time, in the early ’90s, the theater department was much smaller than it is today and would sometimes open auditions to the community when parts needed to be filled.

“I went back and auditioned and was acting in some shows there,” she said. “Then one time they needed some help painting the set, and I said, ‘Well, I do that. That’s what I do.’ And I’ve been there ever since.’”

Each production is unique and calls for a range of materials, skills, and an abundance of creativity to create just the right scene. Sometimes, this means finding ready- made objects and painting trompe l’oeil scenes that fit the time period of the show. Other times, it means capturing the right mood or idea by manipulating light or color, crafting objects by hand, or even finding stuff in the trash, as was the case for the department’s 2019 production of “Marisol,” which featured a character who was homeless.

“One day I was driving to work, and someone had put a baby stroller out with the garbage, so I stopped and got it,” Jones said, laughing. “And that became his thing that all of his possessions were in, so I had to dress that with plastic bags full of stuff to make it look like a homeless person’s belongings.”

As part of the theater department, Jones now gets to pass down her knowledge of set design to students. In addition to mentoring a paid student employee, she also works with students each quarter as part of a lab practicum where they gain hands-on experience with construction, paint, props, costumes, lighting, and electrics as part of the stage crew.

“It’s a range of things from repairing props, putting things away, painting, helping choose colors for the next set,” she said. “It’s kind of the range of things that you do — not all of them are terribly fun — but this is what goes into putting on a show.”

Jones’ love for the arts goes back as far as she can remember, and she recalls always scribbling as a kid. She’s not quite sure where it came from, though, noting her parents had always been very supportive but neither them nor anyone else in their family was particularly artistic.

“I was always just into art — I think it’s not something I picked, it’s something I do,” she said. “I don’t know any other way.” 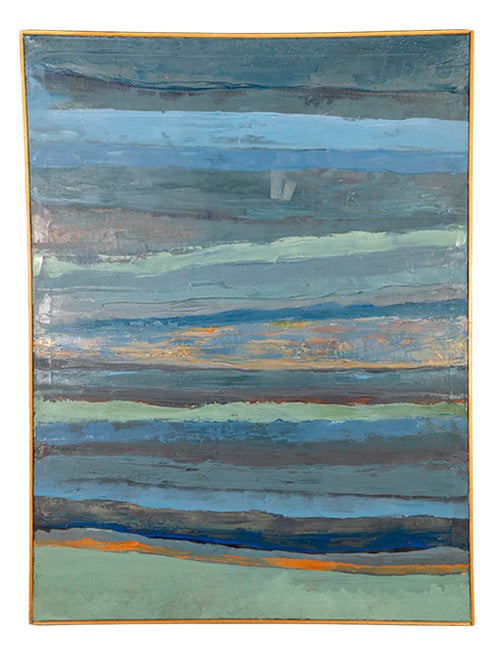 Jones created this painting in 1984 as part of a series for her senior project as a UCR student. Now it hangs in the basement of Sproul Hall in the film department’s designated film studio. Jones chose to bring the painting back to campus for the set of a film they had been working on, noting she added it because it matched the color scheme — but didn’t divulge it was one of her own. Production was halted in March 2020 when the campus was shut down due to the pandemic, and it’s been hanging there ever since. “Now it’s back at UCR, a short distance away from where it was created many years ago,” she said. “It’s pretty funny. I haven’t told anybody.” The department plans to restart production of the film with a new director and cast in spring, but the set, including the painting, will remain the same. 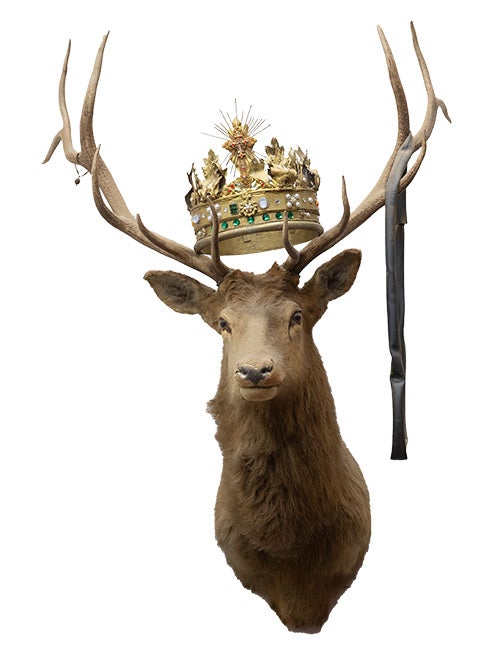 Jones has created a wide range of props for the theater department, sometimes from unconventional materials. She constructed this oversized golden crown for the play “Marisol” in spring 2019, which floated above the stage. Meant to look ethereal and angelic, she turned to Renaissance and religious paintings for reference. As for materials, she said she used oversized cardboard tubes, paint, and bamboo skewers for the golden rays. “With props, if you get the shape, correct, you can build it out of anything,” she said. “You paint it, and you decorate it, and you have distance working in your favor.” The crown is now a fixture of the scene shop, where it adorns a deer head hanging on the wall. 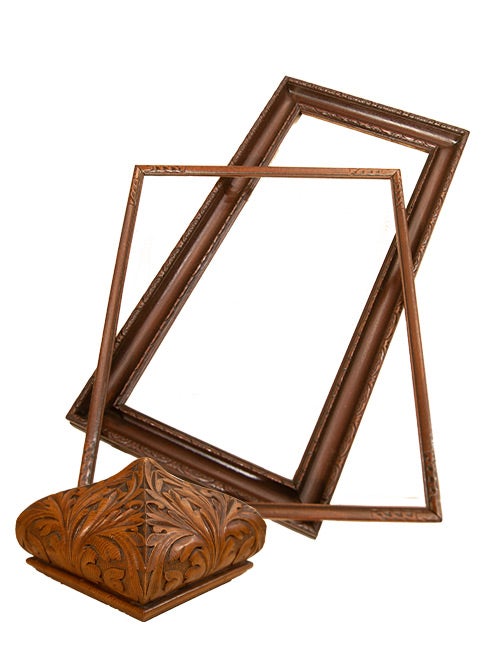 Another hobby of Jones’ is refinishing antiques, like these picture frames and Victorian newel post cap, which she said were in poor condition when she bought them. She said she is particularly drawn to items from the 1930s and ’40s. Other items she’s refinished include a lamp from the ’40s she found at a thrift store, which she stripped the paint from and had rewired, and a seatless ’40s-era chair she purchased from an antique auction for $10. “I just like the process of making something look new again, because so many of the older things are so beautifully built with a lot of unusual details that you just don’t find in new things today,” she said. 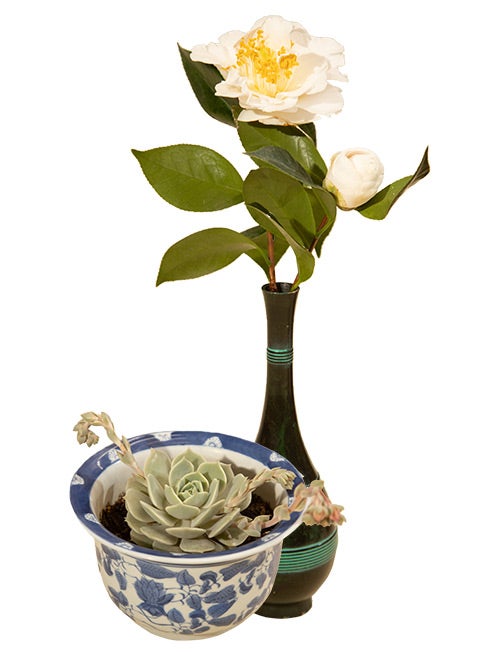 Jones grew these white camellias and succulent in her garden, and often gets new plants from the UCR Botanic Gardens plant sales. She enjoys growing a variety of plants, including vegetables and roses, but said she’s become more interested in native plants, like succulents and cacti, and how they attract insects and other wildlife. She notes she finds a lot of similarities between cultivating a garden and making art. “I like just watching and seeing how things go together, color wise and shape wise,” she said. “It’s almost like a living painting because you’re working with colors, but it also teaches you a lot of patience.”