‘A closed mouth doesn’t get fed’

This future PepsiCo associate was raised without her parents since the age of 9. Her resiliency transformed into grit

Chiamaka Offorjebe doesn’t like to complain about living away from her parents since she was 9, or that she used to be bullied over her Nigerian accent.

She considers herself fortunate to be living in the United States, and her resiliency has paid off. She’s expecting to graduate in June from the University of California, Riverside, with a degree in bioengineering. Soon after, she’ll start her new job as a supply chain associate with PepsiCo in Las Vegas. 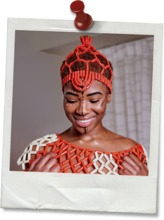 She came to UCR from San Jose, where her two brothers and the aunt and uncle who raised her still reside. Over time, her resiliency transformed into grit. She built a community at UCR by working at the Career Center, joining the National Society of Black Engineers, the Nigerian Students Association dance team, and being fully engaged with her Bourns College of Engineering cohort.

“UCR built me and added to my confidence to be able to say, ‘ask for help.’ A closed mouth doesn’t get fed; no question is a dumb question,” said the 23-year-old who added that living in the U.S. has made her embrace American culture. At the same time, she’s also been able to deeply connect with her African roots.

Offorjebe has clear understanding of who she is — and where she wants to go. Being born in a poverty-stricken village in Nigeria isn’t a matter of shame, she said. On the contrary, it makes her appreciate all the opportunities America has, like planning for her future nonprofit.  She hopes her career with Pepsi will allow her to slowly save money to launch an organization that offers emergency kits to her home village, as well as other communities and countries. These kits will include essential items such as bandages, thermometers, and manual blood pressure cuffs.

Lack of health care is a huge burden for villagers in Nigeria, she said. Offorjebe knows it first-hand. When Offorjebe lived there, she fell ill, and her mother took her to a tribal medicine man. He beat her back with the palm of his hand and claimed tiny black pieces had “popped” out. But she remained sick. Her father then resorted to a six-hour bus ride to a Nigerian hospital. There he phoned his brother in San Jose. Together, they figured out Offorjebe had a severe flu.

“Here, there’s 911, emergency kits, hospitals are fully equipped,” Offorjebe said. “As fortunate as I am, it’s very selfish of me to live here and not help in other countries that are less fortunate. I want families to have a first-aid kit, a thermometer, clean water.”

Offorjebe has big dreams. In addition to supplying these emergency kits, she would also like to pursue an ethnic clothing design company. She loves colors and learning from other cultures, so combining both makes sense, she said.

UCR has helped her believe she can bring these ideas to fruition. It’s a place where she has found support among her friends, coworkers, and faculty members, she said.

“I had professors who taught with passion, like professor (William) Grover,” an assistant professor of bioengineering, she said. “He doesn’t lecture, he teaches. He doesn’t continue until we are all following along. Sometimes professors don’t realize it, but their words, the fact that they believe in you, means so much.”

The unintended consequences of using a ventilator