The tiny creatures Alejandro De Santiago Perez studies are not visible to the naked eye.

They are nematode worms, organisms that live in marine sediment, critical in providing information for scientists regarding the health of our ecosystems. For De Santiago Perez, a microbiology major at the University of California, Riverside, this means endless hours in the lab, behind a computer, figuring out how to organize data to capture critical patterns.

“Nematode worms are important in helping us monitor our global health, ocean health, ties back to climate change, and how it’s impacting our oceans,” said De Santiago Perez, 22, a first-generation student expected to graduate in June. 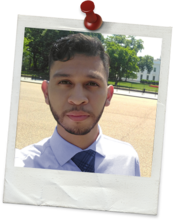 For the young researcher, the microscopic worms are just as intriguing as DNA. Since he was a kid growing up in the San Fernando Valley, he marveled at how the human body functions. In middle school, he made a mess in his mother’s kitchen as part of a failed attempt to extract DNA from fruit.

“My mom was not happy about that,” he said laughing. De Santiago Perez’s curiosity has landed him two paid summer internships at Washington University in St. Louis, Missouri, during which he examined a protein secreted by parasitic nematodes and compared it to a protein made by healthy plants to ward off infections. The lab used bacteria that primarily infects tomatoes to better understand how the protein protects the plant's leaves from infection.

His love for science and computers came from taking Dynamic Genome courses during his freshman year at UCR. There, he found mentors and grew to admire Susan Wessler’s scientific work. Wessler, a distinguished professor of genetics, holds the Neil A. and Rochelle A. Campbell Presidential Chair for Innovations in Science Education and is an internationally renowned researcher who conducts groundbreaking research on genome evolution.

For the past two and a half years, De Santiago Perez has worked 15 hours a week with Holly Bik, an assistant professor in the Department of Nematology. His bioinformatics work requires inputting research data into a computer system that allows the team to see patterns and make sense of information they collect.

“Alejandro is personally leading bioinformatics data analysis for a number of microbial genomics projects in my lab,” Bik said. “His research skills have become more advanced than some beginning graduate students. Alejandro is a model undergraduate researcher.”

For the next year, he’ll be working in Bik’s lab full time. His goal is to then pursue a doctoral degree and, one day, become a professor. De Santiago Perez said more students need to see that scientists can also look like him, a Latino who pursued an education despite economic challenges.

“I want to make science more accessible for other students, for undergrads,” De Santiago Perez said. “I want to provide compensation for their time because some people can’t volunteer because they have to work, which means we are probably missing out on a lot of talent.”