From juvenile detention to college graduation

When Ramón Leija was incarcerated at a juvenile detention center at the age of 17, he couldn’t reach out to hug his mother. Instead, she held him in a long embrace, dampening his sleeve with her tears.

That moment shook Leija to his core. It was then he knew the cold, white interior of a juvenile detention center was not where he wanted to be.

Now 28, Leija is expected to graduate in June from the University of California, Riverside, with a double major in education and political science and a 3.2 GPA. His short-term goal is to study for the LSAT in the hope of attending law school. 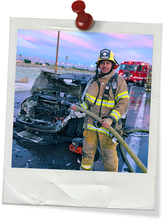 While serving a three-year felony sentence for armed robbery, Leija joined a fire camp team in Ventura County. Saving the forest and people’s homes empowered him, gave him self-confidence, and tremendous satisfaction, he said. It also made the pain of being separated from his family more tolerable. Growing up surrounded by modest means in Indio and seeing his parents struggle to make ends meet has granted him first-hand knowledge of issues faced by low-income communities.

After law school Leija plans to return to Indio and continue to help his community through public policy work. While he was at College of the Desert, he completed two associate degrees and obtained three vocational certifications: firefighter 1, emergency medical technician, and phlebotomy. He is currently a volunteer firefighter in Coachella.

While attending community college, Leija also spent time volunteering and mentoring young men through the Coachella Valley Youth Leadership, helping raise awareness about healthy masculinity, morals, and decisions. He also served as the program manager for the Boys and Men of Color Initiative, led by the Coachella nonprofit Raices Cultura.

“While I was going through this, I was growing myself,” Leija said. “I was coordinating workshops and events, and I got to the point of realization that I needed an education if I was serious about helping my community.”

After transferring to UCR in fall 2017, Leija joined a club on campus, then this fall co-founded the Underground Scholars Initiative, a student organization meant to support formerly incarcerated or system-impacted students.

In 2016 Gov. Jerry Brown appointed Leija to the State Advisory Committee on Juvenile Justice and Delinquency Prevention, a volunteer position he still holds today. In recognition of his comprehensive rehabilitation, Brown granted Leija a pardon in December 2018.

It was one more accolade for the life he’s been working to reconstruct, Leija said. In the future, he plans to run for local office seats, such as city council or school board.

“I’m passionate about my community, about understanding how things are structured in society,” Leija said. “I want to be able to represent people who are underrepresented. I come from that. I come from there.”