For the love of caterpillars

A first-generation student’s journey into entomology

As a first grader, Cebrina Nolan found a caterpillar and instantly fell in love. She took care of it like a pet and was rewarded for her dedication with a butterfly she then set free. Nolan did not realize at the time that fostering the caterpillar would trigger her own metamorphosis from a curious child into a scientist.

Despite what Nolan learned in elementary school, the caterpillar wouldn’t eat the greens she offered it. Her father explained that caterpillars usually have specific host plants, which made her realize that even small creatures’ needs are more complicated than they seem on the surface.

“I became hooked on insects after that,” she said.

In high school, Nolan became captivated by books with “fun facts” about venomous insects, which led her to question why some bug bites were lethal and others weren’t. Her chemistry teacher advised her that the University of California, Riverside, just a 40-minute drive from her Covina home, had one of the most advanced entomology departments in the country. 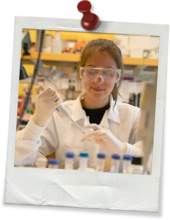 Nolan excitedly came to UCR as a first-generation student and has studied insect toxins under Professor Michael Adams. Though some in her family questioned her specialty, she is on course to graduate from the university in June as a highly decorated academic with academic paper author credits, awards, and accolades almost too long to list.

“Cebrina Nolan displays a remarkable combination of curiosity, motivation and diligence in her approach to laboratory research,” Adams said. “I fully expect her to become a leader in the field of natural venoms, and look forward to reading her future work in this area.”

A member of the prestigious Phi Beta Kappa honor society, Nolan’s awards include the Janet Boyce Endowed Scholarship Fund for Women in Science, the Academic Excellence Award from the College of Natural and Agricultural Sciences, and a Chancellor’s Research Fellowship. She has also been named a finalist for the Barry Goldwater scholarship.

Nolan credits Adams as a major factor in her success, who she said went above and beyond the role of instructor to serve as her mentor. “Professor Adams has really encouraged me to attend conferences, apply for scholarships and awards, and be noticed by others,” she said.

Nolan has paid the favor forward, serving as vice president of the Botany and Entomology Undergraduate Student Association and as a UCR Student Ambassador who helps connect other undergraduates to opportunities for prestigious scholarships. Ever the girl that fostered a caterpillar into a butterfly, Nolan has worked to support her fellow students.

“My life is proof that following natural curiosity with hard work is a recipe for success, and I love helping people follow that same recipe,” she said. “I feel proud when I help others make a difference.”

Soon Nolan will head to the University of Queensland in Australia as a Fulbright scholar. She’ll study funnel web spider toxins under Glenn King, editor of Toxicon, a major academic journal in her field. She explained that learning more about insect venoms could lead to new drug development and a better understanding of the human nervous system.

Afterward, she’ll apply to graduate school to continue her studies on spider toxins. Nolan, who has Mexican heritage, aspires to be a professor in part to encourage other women of color to pursue a passion for science, continuing the tradition of fostering beautiful transformations that began in her childhood.