UCR poll: 'If it's Trump vs. Newsom, Newsom wins'

A poll of UC Riverside social sciences professors holds that Gov. Gavin Newsom should prevail in the current recall effort against him.

Two committees, RescueCalifornia.org and RecallGavin2020.com, have launched efforts to gain 1.5 million signatures to put a Newsom recall on the ballot. The deadline for submitting signatures is March 17, with signatures verified by April 29. Proponents predict more than two million signatures, and Newsom supporters concede recall proponents probably have enough.

But removing the governor from office will be a far greater challenge than getting the recall on the ballot, the professors said.

Twenty-five professors responded to a poll this past week, with most giving the recall effort little to no chance of succeeding. Those canvassed included political science professors and professors whose research intersects with California and national politics, from disciplines including history, ethnic studies, and sociology.

There are several things working against the recall effort, the professors said.

There is no high-profile Republican alternative, such as with the successful 2003 recall against then-Democrat Gov. Gray Davis, in which Arnold Schwarzenegger was a well-publicized GOP alternative. And state and national Democrats have lined up to support Newsom, unlike with Davis.

“I was once invited to a ‘Friends of Gray Davis’ event” during the Davis recall, UCR political science professor and former Riverside Mayor Ron Loveridge said. “And it was clear to me he didn’t have many friends.”

“Schools will be back in session, restaurants will be reopened, most people will be vaccinated. Life may not be back to normal, but it will be pretty close to what it was before,” Loveridge said. “The farther we get from the pandemic, the meaningfulness (of the recall) will be called into doubt.”

Loveridge and political science professor Shaun Bowler said Newsom is vulnerable on a few fronts. Bowler alluded to a “muddled” COVID-19 response. The dispersing of California unemployment benefits in particular has been slipshod, Loveridge said.

But those are relatively complex issues for an electorate to distill. Voters have been more impassioned about a Nov. 6, 2020, episode in which Newsom dined with friends at a high-end Napa Valley restaurant in the midst of pandemic restrictions.

Still, Bowler said, the “French Laundry” episode is likely to be a glancing blow to Newsom rather than a knockout punch.

“The thing is, most people assume politicians are like that anyway, especially if it is a politician from a rival party,” Bowler said.

Loveridge and Bowler, an expert on the Schwarzenegger administration, contrast the two recall efforts in terms of motivation.

“Davis was not seen as a leader who handled the energy crisis well,” Bowler said. “There was also a car tax issue that was especially prominent on talk radio.”

Loveridge, a first-hand observer of statewide politics since before the Ronald Reagan governorship, said the Newsom recall is driven by the anti-masking, pro-reopening sentiment of former President Donald Trump’s supporters. 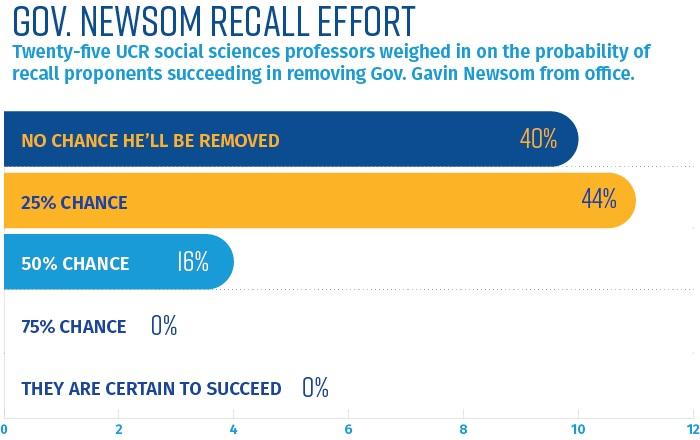 The queen is dead. Will the monarchy survive? Should it?