The day the ‘60s protest movement came to UCR

Unrest at the University of California, Berkeley, became synonymous with the student protest movement, and earned a place in American history textbooks. But other UC campuses experienced tumult as well, and — for one chaotic afternoon — UC Riverside was among them.

Fifty years ago, during a campus visit by then-California Gov. Ronald Reagan on March 11, 1970, UCR experienced its first-ever student-police confrontation on campus, and the first time a protest turned violent.

Reagan’s battle with the UCs

Reagan inspired passions on UC campuses, just as he did among the electorate. The sentiment toward campus unrest was far different off the university campus than on, and — when Reagan ran for governor in 1966 — he gauged that in a manner incumbent Gov. Pat Brown did not.

When Reagan began his run for office, political advisers had told him to target the issue of student revolt. And so he stoked voters’ fears as well as the working-class perception of academics as elitists — “radicalized” faculty, and “Communists” who were inspiring the students to rebellion.

Reagan realized a hard line on student protests would boost his populist stock with the growing California conservative movement. He spoke to frenzied crowds in verbose terms about sex, drugs, and communism on the Berkeley campus.

“I don’t care if I’m in the mountains, the desert, the biggest cities of the state, the first question is, ‘What are you going to do about Berkeley?’,” Reagan once observed.

He said: “There are too many in the academic community who consciously, or unconsciously, bare their contempt for the ordinary citizen who may not have had the benefit of a college education, but who is sharing a very heavy tax burden, some of which goes to pay the cost of professors’ salaries and administrators’ expense accounts.”

Reagan was perceived as the champion of the outraged taxpayer, and he won the 1966 election easily.

Once in office, one of his first orders of business was to dispatch UC President and icon Clark Kerr, a liberal who he had named as the person responsible for Berkeley’s unrest.

Protests boil over, and the governor digs in

Things came to a head in Berkeley in May 1969, at People’s Park, which community activists had christened a “free speech area.” Reagan ordered state and city police officers to quiet protestors, who grew to 6,000 strong. One hundred twenty-eight people were injured, and one student was killed. For two weeks, the National Guard patrolled the streets of Berkeley, quelling unrest.

An investigation revealed that excessive force was used, but in the media, Reagan was unapologetic. 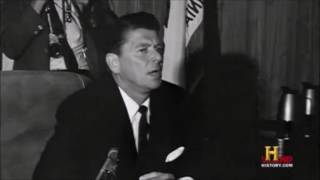 “There was no alternative … once the dogs of war are unleashed, you must expect that things will happen and that people, being human, will make mistakes on both sides,” Reagan said after tear gas was used on May 20 in a Berkeley lecture hall.

The unrest threatened to spill onto other UC campuses, and UCR Chancellor Ivan Hinderaker called together a large student gathering by the bell tower. He ordered the flag flown at half-mast for the spring quarter, in recognition of the Berkeley incident.

UCR is “confident it can and will change to match the times,” proclaims a 1969 UCR promotional video produced after the Berkeley protest, seemingly to reinforce and perpetuate Riverside’s relatively peaceful campus culture. Narrator Raymond Burr — of “Perry Mason” fame — boasted: “These changes didn’t produce the high drama of violent confrontations, but the benefits are far more genuine, and much longer lasting.”

The message was hopeful, if overreaching. 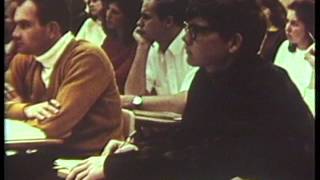 “It was quite a tense time,” recalls Ron Loveridge, a political science professor at UCR since 1965. “It was an extraordinary, tumultuous time on campus.”

By February 23 and 24, 1970, the Isla Vista Riots erupted on the UC Santa Barbara campus, with several hundred protestors, cars and trash cans torched, and a bank building leveled. Two UCR Highlander newspaper writers were arrested in Santa Barbara, and later indicted by a grand jury for their roles instigating rioters.

Less than two weeks after the Isla Vista Riots, Reagan traveled to UCR. The day before his UCR visit, on March 10, 1970, Reagan had launched his re-election bid, and one of his platforms was the fight against smog. The governor was to visit the air pollution research center at UCR’s Fawcett photochemistry laboratory, where he would hear presentations about Project Clean Air.

Loveridge was among 14 faculty members asked to participate in Reagan’s visit on March 11, 1970 to the UCR campus.

When Reagan’s procession arrived on campus around 2:30 p.m., it was met by 300 protestors who had migrated from a planned 2 p.m. protest at the bell tower. Their signs read “Four years is enough,” and “Keep UC Free.” The Associated Students group later framed the protest as “a demonstration … to impress upon Governor Reagan his duty to fight air pollution.”

As the governor’s procession arrived, university officials urged students to move from the access road to the Fawcett lab. Instead, according to Press-Enterprise newspaper accounts, several of them lay down in the road.

Suddenly, 25 Riverside police officers streamed from the Fawcett laboratory in riot gear, joining another 25 campus police officers and Riverside County sheriff’s deputies. They made a “V” formation and cleared the road, wielding billy clubs and shoving students out of the way.

Four male students were among those accused of shoving back at police. They were arrested, and later suspended from the university. A group of students tried to charge Fawcett’s front doors but were repelled by police.

Reagan’s Cadillac steered to a back door, dodging protestors who were crowding the main entrance. Nonetheless, Loveridge said students made their presence known from outside the windowless Fawcett Lab.

“They were throwing avocados and oranges on the metal roof,” Loveridge said, recalling the thunk-thunk-thunk sounds from protest fruit that permeated Reagan’s hour-long meeting.

After, Reagan went out the back door again to be whisked away by the Cadillac. Loveridge said a couple of students yelled at the governor. Accounts hold variously that Reagan responded by smiling and waving or giving them the finger.

“I think it is significant that on a campus of 5,400 students, only 200 to 300 were in that demonstration,” Reagan remarked later. He labeled the UCR demonstrators “cowardly little fascist bands who are trying to prove that our system cannot work.”

In the days to follow, the Highlander student newspaper framed the violence as having been initiated by police, characterizing the protest as a peaceful one. The newspaper unsuccessfully called for the four students’ reinstatement, writing that the administration and police made an “appalling collection of mistakes.”

“This is the first and last time anything like this has happened on campus,” Loveridge said, reflecting on his 55 years at UCR Riverside, which was founded in 1954. “People see Reagan as this conquering hero, but there was a time when he came and there was this extraordinary protest.”

Three days later, Reagan was greeted by hundreds of people in an egg-lobbing mob at San Jose State College. In April, another riot flared up in Santa Barbara. “If it takes a bloodbath, lets get it over with,” Reagan famously remarked.

If it was campaign mudslinging, it was a clod that hit its mark. Reagan was never able to lasso campus unrest in his eight years as governor. But it did nothing to diminish his popularity among conservatives.

“We have proven, and proven to the nation, that this is the answer, and this is the only way to handle it,” Reagan said of his iron-fisted template for countering campus unrest.

Within two months, UCR joined more than 250 colleges in nationwide student protests following the expansion of the Vietnam War into Cambodia, and subsequent May 4 Kent State shootings.

Blueprint for a legacy

Many historians today depict 1960s campus protest as a small number of students painted by Reagan as a massive conspiracy, and in the process galvanized voters.

“Reagan accurately gauged and exploited public discontent with campus protests and the counter-culture,” said Steve Brint, a UCR distinguished professor and an expert on the 1960s counter-culture movement.

“The protesters at Berkeley may have helped to end the War in Vietnam,” Brint said, “but Reagan created a blueprint for the long-term success of the Republican Party as the voice of conservative ‘middle America’ and ‘the silent majority.’”

On the way to a landslide victory in the 1980 presidential campaign, Reagan aroused voter passions with sentiments for more conservative values. It was a clarion call that no doubt rang familiar on UC campuses.

Gun control legislation is popular; why won't it pass?