The high school class of 2020 experienced many voids. No prom, no walk across a stage to receive their high school diploma, nor on-campus first-year college experience.

For that reason, Alejandra Dubcovsky, associate professor of history at UC Riveride, assigned a creative project around the class theme: memory, silence, and resilience. The projects these 65 students produced resulted in YouTube videos, paintings, collages, photography, and poetry.

“The assignment gave them a creative space; they really needed that and it validated the difficulty of their reality,” said Dubcovsky of the students taking her CHASS Connect program, which falls under CHASS F1RST, a first-year experience designed by the College of Humanities Arts and Social Sciences to support freshmen and transfer students. Many of the participants are also first-generation students, meaning they are the first in their families to attend a four-year university, with neither parent or guardian having graduated with a four-year degree in the United States.

Dubcovsky said COVID-19’s ripple effect has meant some students are at home dealing with ramifications such as unemployed parents, homelessness, unsafe home environments — and for some, dealing with immigration-related cases involving themselves or family members.

Dubcovsky and her teaching assistant Elizabeth Miller asked students to think as historians, document their life and feelings, and think critically about the project. The assignment seemed fit for the cohort; the group enrolls in CHASS Connect program for the entire first year, allowing them to take a class with a different professor each quarter.

“We had been analyzing, uncovering stories of marginalized people in history, including those who don’t necessarily have their own voice included in history,” said Miller, a fifth-year religious studies doctoral student. “The students then looked at their own experiences and shared amazing, compelling stories.”

Meet some of the students and their stories:

Felipe Lara, 18. A political science major living on his own in San Diego. The entire year added additional layers to the already complex reality brought on by the pandemic: He was forced to live on his own, which meant sleeping in his car for days and having to find two jobs to get back on his feet. He now has his own apartment and decided to share his experience in a six-minute video he titled “The Journey.” The video starts with images of high school, of him and his soccer team, then moves into Lara speaking in front of the camera, crying at times.

“The assignment was hard because I have a problem speaking about my personal issues, but then decided to put my life in a movie trailer format. I wanted to show a timeline of how things go up and down for a student and for everyone else, so I just got the courage and talked to the camera. I work two jobs, one is full-time at Amazon as warehouse worker, the other is part-time at Target fulfilling online orders. I was also blessed to be the middle child; I am number five of nine kids. I was blessed enough to grow up very independent and my freshman year really made me understand the importance of reaching out for help. It was really nice to know that there are people out there who can help you. I also understood that it’s ok to ask for help, that because you are Latino you do not have to live in this “machista” culture. We are a new generation. It’s OK to be vulnerable, to ask for help. I want people to know that life is hard, but as long as you believe in yourself there is light out of the tunnel. Never give up on yourself, hope is very much real in a dark world, especially around these times.” 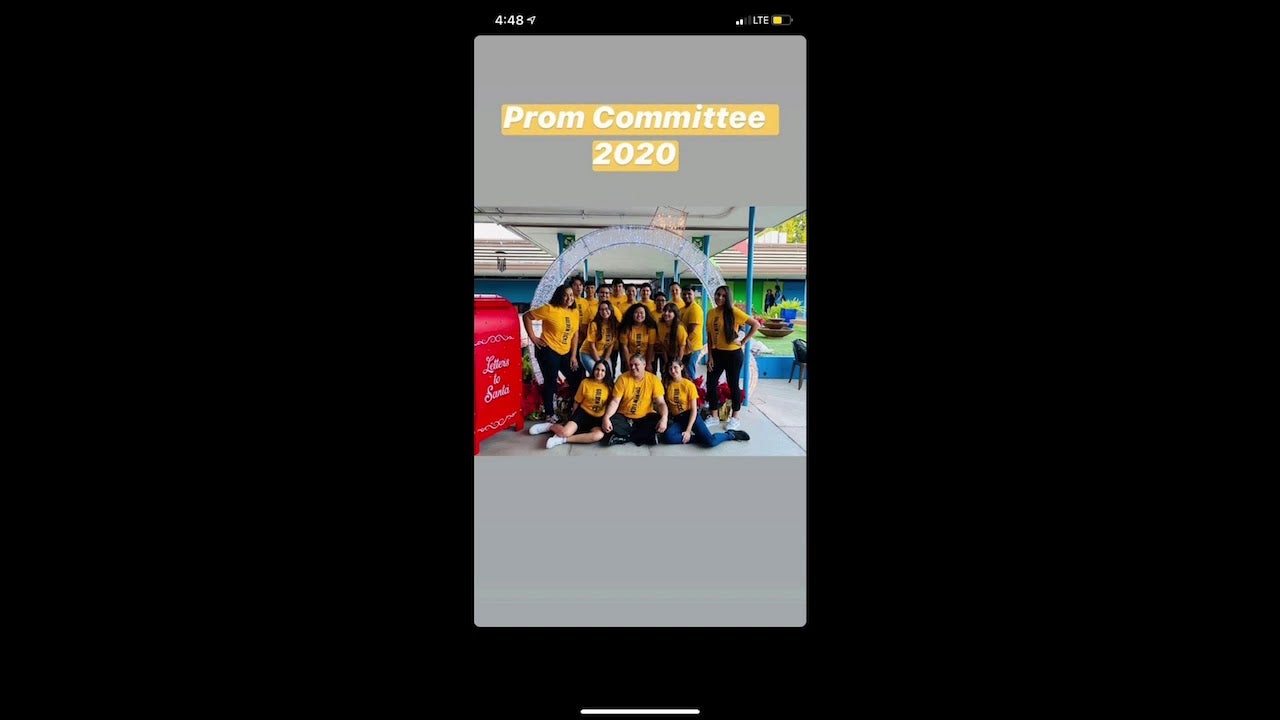 Leticia “Lety” Ocampo, 19. A political science major living at home in Pomona. Her black and white photo collage was inspired by documentaries. Once she had a clear idea of what she wanted, she Googled images, converted them into black and white, and strategically placed them on a poster board.

“I captured what was important to me: How Black Lives Matter impacted me because it felt so real, the events were surreal. Then there were people waiting in long lines for food, at Costco, others fighting over toilet paper. I felt empowered with this project because I was like, ‘100 years from now, what do you want people to remember about 2020?’ I had a say, I had a voice, I had a way to make history and history was all around us. Also, going to college as a first-generation student took a physical and mental toll. I had to deal with imposter syndrome. I would feel like I didn’t deserve to be here, that there are smarter people and I didn’t deserve it. But I worked hard and I do deserve to be here. I had this mentality that I had to do this all by myself, but UCR has taught be that it doesn’t mean that at all, that I can ask for help.” 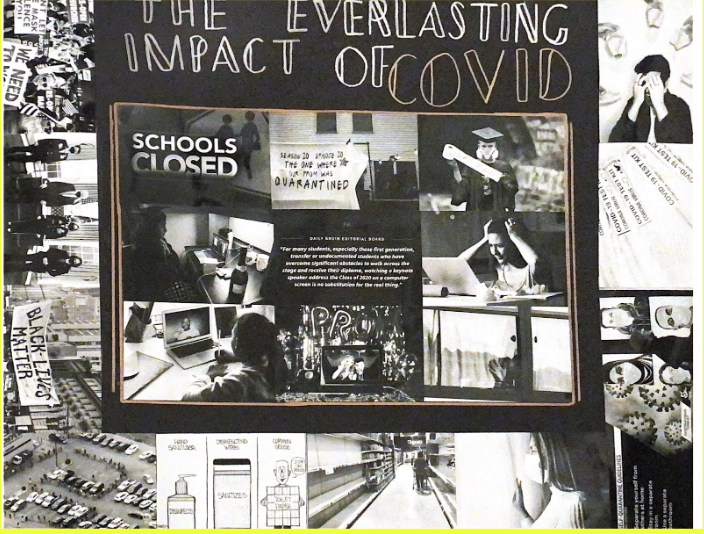 Stephanie Ortiz, 19. A political science major living on campus. She is also a proud Deferred Action for Childhood Arrivals, or DACA, recipient. She expressed her feelings and her experience in a bilingual poem. Her parents brought her from Mexico to the United States when she was 3.

“I am first-gen, the first person to apply and attend college — it’s also the first time I have my own space, my own room. I didn’t have prom, I didn’t have the walking across the stage to get my high school diploma that would have been a symbolic proof that my parents’ sacrifice was worth it. I wanted this to be a bilingual poem because at home my world is Spanish, we speak Spanish all the time; at school it’s all English. And both of those languages is who I am. I also wanted to pay homage to my parents for all their sacrifices.” 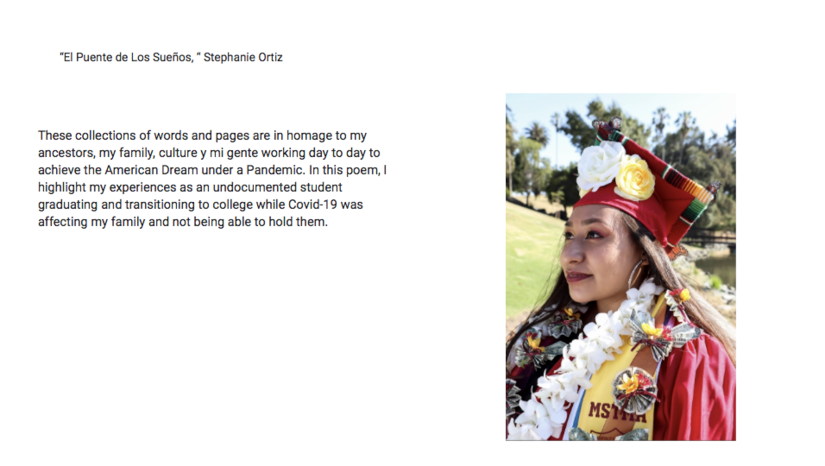 Jasmine Pinedo, 18. A sociology major living at home in East Los Angeles. Her hand-drawn sketch depicts her as the main character, with images of a battery losing its charge and slowly recharging as the year progresses. At home, she had to manage wrapping up her senior year online, starting college virtually, coming to terms about babysitting her 9-year-old sister and two of her neighbor’s kids. Then there was navigating the stress brought by her parents’ COVID-19 positive tests. Both of her parents are safe now and back at work.

“It was tough during the summer, more towards the end of my senior year, I felt my mental health was impacted. In December, my parents got COVID, and we had to quarantine in our small apartment, I was getting about three hours of sleep, worrying that my parents would die because they got sick…a neighbor died of COVID and I had all these thoughts about what if my parents die, and I have to take care of my sister? What’s going to happen to us? Then something clicked. I realized I just had to connect with my younger sibling. I knew I had to become a role model towards my sibling to show her that you never give up, and that you seek for answers when you have problems. I realized I also had more time to do things I loved. I started watching more anime, playing the kalimba, started a collection of Japanese anime and drawing more. I began to enjoy school. When winter quarter started, I started making friends online through this class, and now I’m planning to room with a friend from CHASS First and live near campus in the fall. It was as if my battery was fully charged now.”

Annette Vazquez, 18. An English major living in Moreno Valley. Her 15x19 canvas art piece is a dramatic black and white labyrinth with three warped faces in watercolor. She took inspiration from time warp videos on TikTok, titling her piece “Where Is My Mind?” — the same title of one of her favorite songs.

“The image is me; I’ve felt mentally drained throughout this whole process. I found myself questioning and chose a chaotic background to represent the world right now, then came up with ‘Where Is My Mind’ for the title. It’s a song by Pixies. This past year was tough. The last day of school for me was March 13, 2020. Rumors were that we were going into a worldwide lockdown. I was looking forward to my senior year and all the events. I recorded video on the last day … I remember calling my mom and crying. I love school. While others were happy, that was not the same for me. I don’t really like online learning, then continuing school in an environment that I have never done before was tough, even worse when it came time to choosing a university. UC Santa Cruz was my first choice, but my parents didn’t want me to go far away. You know, being first-gen from a Hispanic family my parents didn’t want to let me go. But now I’m grateful for the decision I made because I love being close to home. I chose UCR and I’m grateful for that decision.” 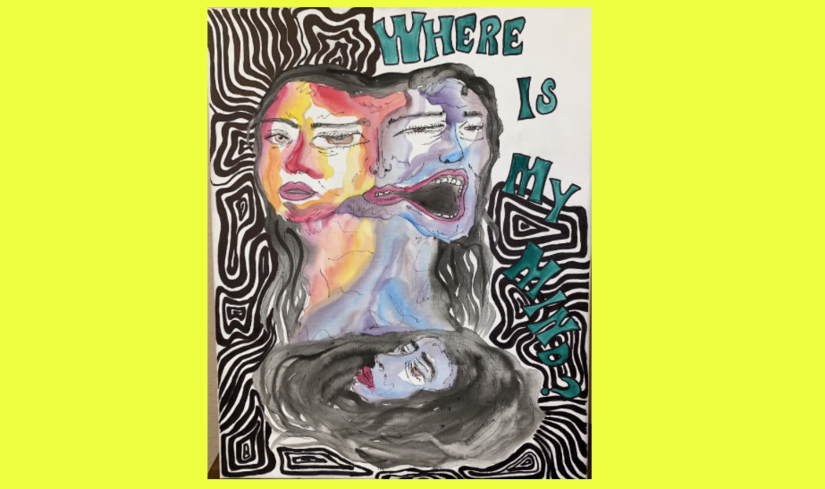 Anahi Lopez, 18. A film major and is living at home in Delano, in central California. Her film, “A Rainbow After the Storm,” is four-minute video now posted on YouTube. It starts with a girl dreaming of past vacations, time spent hugging friends, only to wind up spending neverending days behind the computer screen.

“I finished high school on my school Chromebook; I graduated through a TV screen, and celebrated on my couch in a cap and gown that only me and my mother saw me in. Now I’m in college, doing the same thing I did in high school, opening my laptop and entering a Zoom meeting … the hard part about this is the routine … but we all have to remember that one day this will all be over… it will lead us to become a rainbow after the storm,” she said in the video.
“My idea for this assignment was to capture the sense of routine. For some time, I was going through this phase that I felt like I couldn’t take a break. I couldn’t distinct the days; they all felt the same to me. I wanted to show that because I know this was likely the same for other students. I took a digital art class in high school, and I fell in love with telling stories through pictures. In this case, through a video. What I would say to others is just to push through, keep going. It’s going to come to an end, and everything is going to get better. I learned about resiliency from my mom; she’s always pushing herself to do better for her children.” 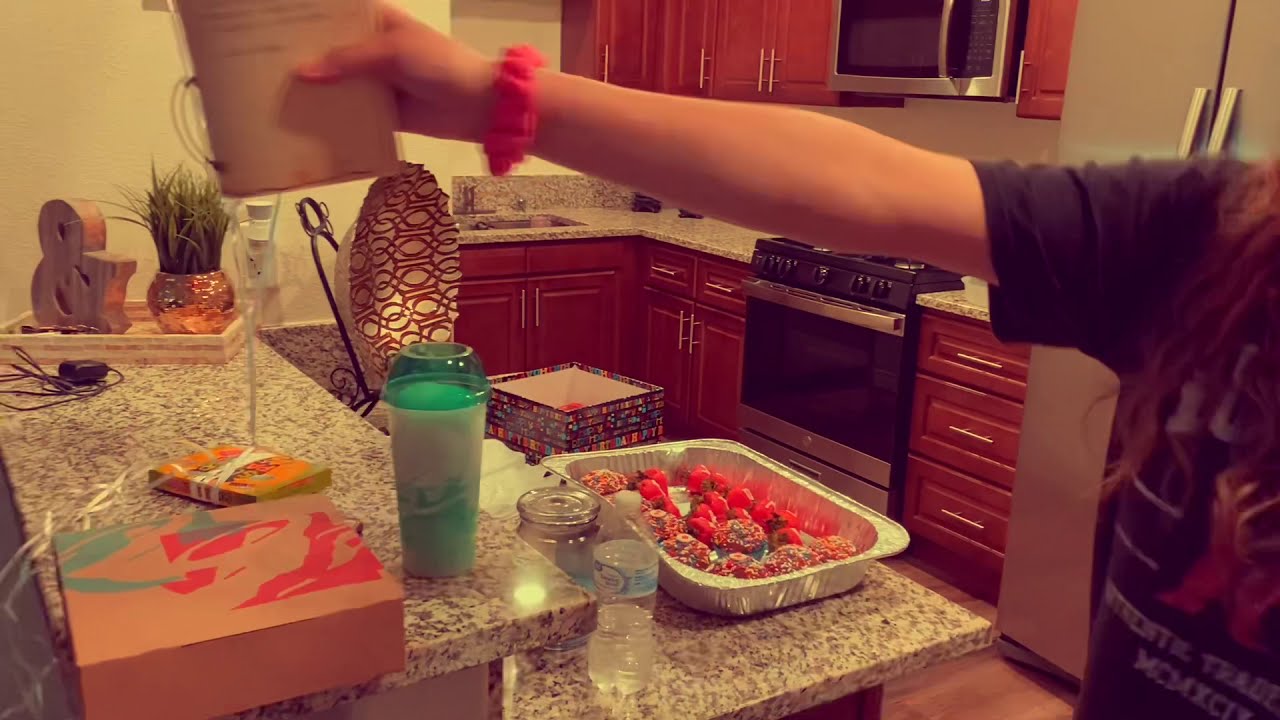