Music lecturer recognized by the National Endowment for the Arts

When Tagumpay Mendoza De Leon left his native Republic of the Philippines 50 years ago, he only had one priority: work to support his parents, who remained back in his homeland.

Being away from the motherland was difficult, but his companion, a Filipino bandurria instrument, eased the longing. The notes coming from the 14-string acoustic, resemblant of a small guitar, allowed him to play tunes such as “Sampaguita,” a song that pays tribute to the Philippines’ national flower.

For 20 years De Leon has brought to UC Riverside his culture, history, and love for Filipino rondalla — a musical practice comprised of an ensemble of stringed instruments. Throughout the years, the 76-year-old lecturer has worked with dozens of students, giving them a glimpse into this musical fusion with Spanish roots, also found in countries such as Cuba and Mexico. De Leon has also been a central force in preserving and promoting Filipino music with the ensemble he founded 30 years ago in Los Angeles, the Rondalla Club of Los Angeles.

His influence was recognized by the National Endowment for the Arts, or NEA. This summer he was named a National Heritage Fellow and is one of nine fellows whose life journeys were featured in the film debut “The Culture of America,” released on Nov. 17 by the NEA. The virtual event was hosted by actor Jimmy Smits. 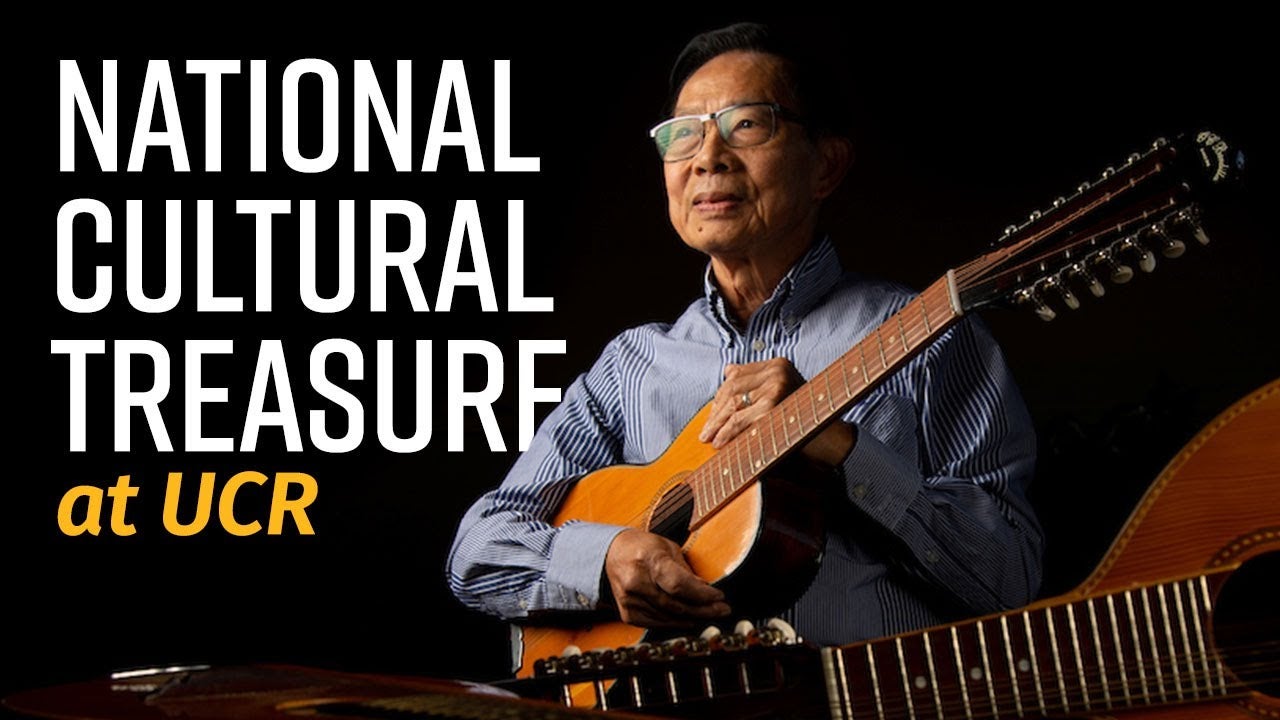 “This is a big deal. These fellowships are the equivalent of what in other countries are called National Artists or Living Cultural Treasures,” said Deborah Wong, professor and ethnomusicologist at UCR specializing in the music of Thailand and Asian America. Wong and former UCR doctoral music student Neal Matherne nominated De Leon for the award. Most nominees don’t get selected on the first attempt, but De Leon did, Wong said. The NEA recognition came with a $25,000 award.

De Leon, known as Uncle Pi, has been teaching a Friday evening class — first at Olmsted Hall and now at the World Music Studio in the Athletics Building — since 2001. His very first class had 28 students, including Matherne, with only 12 instruments to share among them. Most students then were of Filipino descent, he said. Now the interest in rondalla music has amplified and Chinese, American, Korean, and Mexican students also take his classes.

“I teach because I want to discover new talents,” said De Leon, a rondalla lecturer with UCR’s Department of Music.

At his Burbank home a day after receiving the NEA medal, De Leon said he was surprised by the award.

“It’s interesting because I am self-taught. My mom was a concert pianist and my dad a composer and an orchestra conductor, but my dad discouraged us from becoming musicians because he always told us, ‘You want an additional way of earning a living.’”

In the Philippines, he enrolled at Mapúa Institute of Technology, now known as Mapúa University, and graduated with a bachelor’s in chemical engineering. At home he still joined his parents when they rehearsed; many of the early tunes De Leon played were from Felix Mendelssohn and other European composers.

Now his repertoire is about 500 songs, mainly music from the Philippines, but he can also strum Mexican melodies.

Along with the Rondalla Club of Los Angeles, De Leon played at Chateau-Gombert International Festival held in Marseille, France in 1990 and 1993. He is also a member of the Filipino American Symphony Orchestra, playing contrabass. The L.A.-based orchestra last performed at the Walt Disney Concert Hall in 2019.

On campus, he works with students to provide them with growth opportunities, including joining UCR’s Gluck Fellows Program of the Arts, he said. For the past 15 years his rondalla student ensemble has performed on campus during Filipino Culture Night, popularly known as PCN. The event that has become so popular that it has moved to the Fox Performing Arts Center in downtown Riverside.

“Your contributions to preserving the rondalla here in the United States contributes to our nation’s pride and heritage,” said UCR Chancellor Kim A. Wilcox in a video message honoring De Leon. “But I think also of all those Filipino Americans and others of Spanish descent for whom the rondalla has such an impact. All those are recipients of your contribution to our collective heritage.”

When De Leon left the Philippines in 1971, he joined the growing exodus of Filipinos in search of greater economic opportunities. He is among the approximately two million Filipinos now living in the United States; the Los Angeles area is home to the largest Filipino American population in the country. Upon his arrival, De Leon settled in Burbank, the city where he and his wife raised three children.

De Leon uses both the stage and his classroom space to steward the rondalla tradition and transmit its rich heritage. During a recent class, Ricky Zeng, 23; Karen Plascencia, 23; and Jiaqi Li, 24, took their instruments and followed De Leon’s instructions. The students followed the notes on paper or on their cell phones.

Learning a new instrument and the history that surrounds rondalla ensembles is what primarily intrigued these three students, they said while De Leon tuned their bandurrias, the smaller of the instruments in a rondalla.

Zeng said he is fascinated by the rondalla and its Spanish roots, as well as how the 377-year Spanish rule of this Southeast Asian island influenced all strands of Filipino life and culture.

“I’m naturally interested in different cultures, in learning how they changed,” said Zeng, a fourth-year gender and sexuality studies major. This is his first quarter taking De Leon’s class. De Leon shares stories with them, about the instruments, about the Philippines, and about the songs they play, he said.

The NEA values De Leon as a “cultural bearer,” meaning his teachings carry significant culture knowledge and memory, said Wong, the professor who nominated him for the award.

“We already knew that he was amazing, and now the whole country knows,” Wong said. “The reason we’ve had him teach for so many years is because he is not only an amazing teacher but also known and deeply respected in the Filipino America community. What the NEA recognized is that Tagumpay is a person passing on his tradition to the community in a very sustained and meaningful way. At UCR he does this through the ensemble class, and we are so fortunate to have had him in our midst for so many years.”