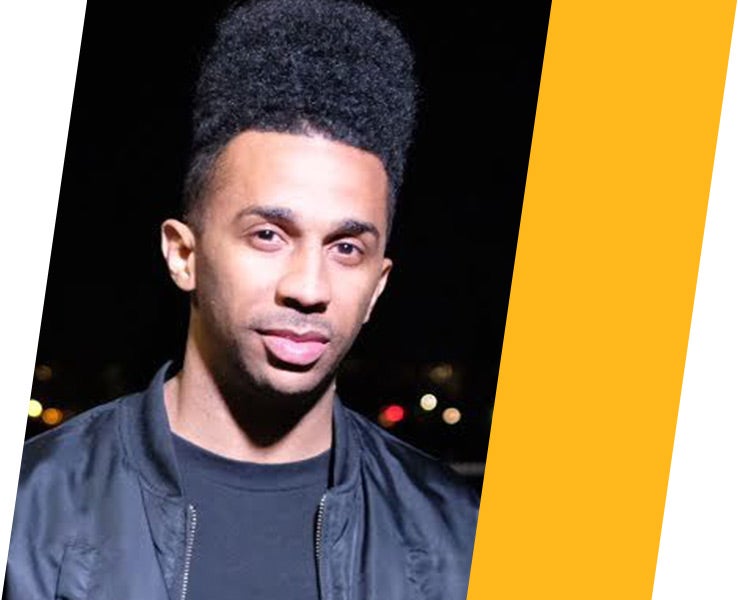 Journalist and filmmaker Dexter Thomas followed his passions to success

Dexter Thomas didn’t take the traditional route to become a journalist and documentary filmmaker. Before college, he thought he needed connections to enter this field. Instead, Thomas, 37, carved out his own path, offering a different perspective on world and cultural issues, whether it was racism, sneakers, or Japanese hip-hop. For the past five years, Thomas has been a producer at Vice News. A piece about the Black Lives Matter protests in 2020 he contributed to won an Emmy.

The Emmy-winning segment looked at how police officers began kneeling with protesters in summer 2020 after the death of George Floyd and the possible tactical reasons they did so. Another Vice piece he produced examined the phenomena of white supremacists with tattoos featuring Japanese words. Thomas credits his analytical skills to his studies as an English major at UCR, specifically a class taught by John Kim, an associate professor of comparative literature and languages. He discovered how art, books, and film could be read and interpreted in different ways, skills that could also be applied to the broader culture.

“What are the motivators that are behind the way other people read the world in the way they do?” he said.

Outside the classroom, Thomas spent much of his time as a DJ at KUCR, where he hosted two weekly shows, one devoted to hip-hop and the other to electronica.

“KUCR is the core of my UCR experience,” he said, noting that he’s only half-joking when he says he lived at the radio station.

“WHATEVER IT IS YOU’RE INTO, GET REALLY, REALLY, REALLY GOOD AT IT ... THE WAY FORWARD WON’T BE CLEAR IN THE MOMENT, BUT IT WILL PAY OFF.”

Kim encouraged Thomas to pursue graduate school, suggesting he do so in a note on a class assignment. Thomas, who graduated from UCR in 2006 and went on to earn a doctorate in Asian studies at Cornell University, still has that paper saved.

A few years after graduating, Thomas was accepted into a study abroad program in Japan and spent two years researching Japanese hip-hop. He acquired hundreds of CDs and magazines that he later donated to the Tomás Rivera Library for a collection in his name.

After a second trip to Japan, this time as a Fulbright scholar, Thomas began blogging on political and cultural issues and freelancing for publications like Al Jazeera English, National Public Radio, and the Guardian. That led to a job offer as a reporter at the Los Angeles Times, which he began only a few months before the December 2015 San Bernardino terrorist attack.

While at KUCR, he had gotten to know members of the Islamic Center of Riverside, dining there for Iftar events often, so he reached out to see how they were doing after the shooting. He found out that one of the shooters had attended the center but was not a regular and usually kept to himself. Thomas knew the news was bound to get out but realized he could set the narrative with his article showing that the center had no connection to the attack.

“I was worried about everybody down at the mosque,” he said, noting he hadn’t originally planned to write a story.

The Los Angeles Times team covering the attack won a Pulitzer Prize, although Thomas is modest about his contributions and prefers to credit his colleagues.

After less than a year at the Times, Vice contacted him and asked him to audition for a new HBO show, which was to be called Vice News Tonight. Thomas had never been on camera but found the project intriguing and has been there since, exploring a wide variety of subjects. For Thomas, each step he’s taken has been about following his passions. His advice to students is to find an interest and “just go 110% on it.”

“Whatever it is you’re into, get really, really, really good at it and become an expert, so you could write a book if you had to,” he said. “The way forward won’t be clear in the moment, but it will pay off.”