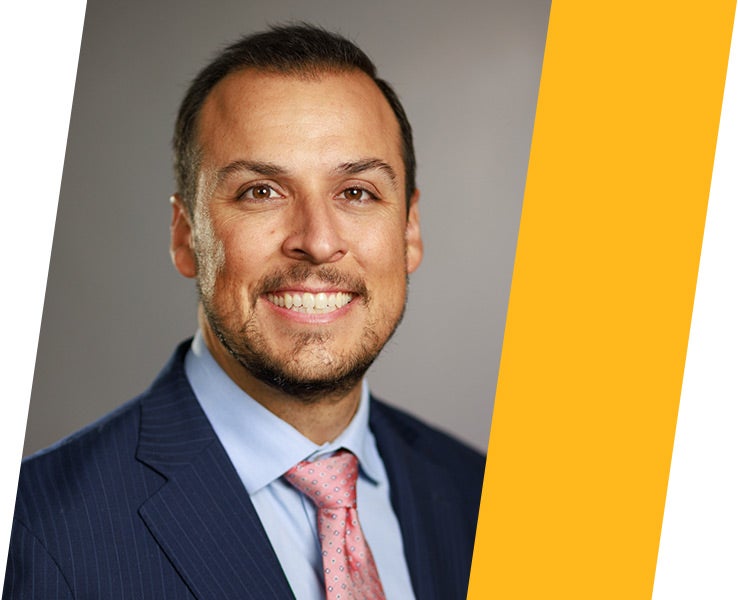 It would be fair to say that Nicholas Focil, 35, has done alright for himself in the 13 years since he graduated from UCR in 2009 with a bachelor’s degree in biochemistry. He is the founder and CEO of FOMAT, a 10-year-old clinical research organization; the chairman and co-founder of healthcare startup Febo; and an executive board member at HyperCORE International, one of the world’s largest networks of clinical trial sites.

For all of this, he cites his time at UCR as having been essential. Originally, he thought he wanted to pursue medical school, but he quickly realized that it wasn’t for him. Instead, he threw himself into his studies in the Chemistry Honors Program and collaborating with the Loma Linda University Medical Center on drug trials.

“My undergraduate experience was a cornerstone of my career,” Focil said. “It gave me much more than a background in biochemistry. It exposed me to different cultures, religions, and socioeconomic statuses as well as pain, big heartbreaks, and my best friendships.”

Focil went on to earn a master’s degree in management and organizational behavior from California Lutheran University. His academic training helped him launch FOMAT, where he is working to make healthcare research more relevant to underrepresented communities through innovative education and outreach programs. A recent report from the U.S. Food and Drug Administration highlighted a significant imbalance in representation of minorities in clinical research. While white Americans make up 67% of the U.S. population, they constitute 83% of research participants. Black Americans make up 13.4% of the population, but only 5% of trial participants, and Hispanic/Latino Americans represent 18.1% of the population, but fewer than 1% of trial participants.

FOMAT aims to educate these underrepresented communities about serious health risks and ways to prevent conditions from occurring. This is an important goal for Focil, whose first language was Spanish and whose parents both hail from Ecuador.

“WHATEVER YOU CHOOSE, STICK TO IT. THE GRASS ISN’T GREENER SOMEWHERE ELSE.”

Companies like Moderna and Pfizer hire FOMAT to conduct trials on the vaccines and treatments they bring to market. They’re currently testing in nearly 70 different therapeutic areas including COVID-19. FOMAT is also one of 10 alliance partners in hyperCORE International, a super network of highly experienced and awarded clinical trial sites working together to accelerate research. Together, they have over 100 sites in five countries conducting studies of medical treatments.

“I believe it’s going to be a game changer for people with chronic conditions, empowering them to have more agency over their health,” Focil said.

Others agree. Last year, the Northern California MIT Healthcare Association chose it as one of the top 100 healthcare startups. The most popular tool in the app offers users validated news about their condition. For example, they can follow “Parkinsons” and any research related to it around the world is translated into English and sent to users in real time. This allows people to be proactive in the ways they work with their doctors, asking for thoughts on new studies or treatments.

Focil is clear about what it takes to achieve success, and he has three specific pieces of advice for the next generation of Highlanders. First: focus.

“Don’t jump around,” he said. “Whatever you choose, stick to it. The grass isn’t greener somewhere else.”

“The average person works an eight-hour day. If you work 10, in four years you’ll have worked a full year more than your competition,” he said. “A little extra goes a long way.”

Third: lose the obsession with ‘finding your passion.’ Just as many people fall in love with a romantic partner over time, Focil believes the same is true of a career.

“People think there’s a eureka moment, but I don’t buy into that at all,” he said. “Hollywood has done us a disservice promoting the fantasy of an instant, perfect fit. The vast majority of us learn to love what we do with time.”