RIVERSIDE, Calif. (www.ucr.edu) —  Smart boxers bind their hands with strips of cloth to avoid injury when they pack a punch. Millions of years ago, the “smasher” mantis shrimp, one of nature’s feistiest predators, figured out a similar way to protect the hammer-like club it uses to pulverize prey with incredible speed and force.

In research published today in Advanced Materials, a group of researchers led by UC Riverside’s David Kisailus has identified a unique structure that wraps around the mantis shrimp’s club to protect it from self-inflicted damage as it crushes hard-shelled prey. The finding will help Kisailus’ team develop ultra-strong materials for the aerospace and sports industries.

Mantis shrimp, which are also called stomatopods, are aggressive crustaceans known for killing their prey using a predatory strike that is among the fastest known animal movements. Stomatopods are divided into two groups: “spearers,” which attack soft-bodied prey using a harpoon-like structure, and the more recently evolved “smashers,” which crush hard-shelled prey using a hammer-like appendage called a dactyl club.

Kisailus, who is the Winston Chung Endowed Professor in Energy Innovation in UCR’s Marlan and Rosemary Bourns College of Engineering, has been studying smashers’ clubs as inspiration for the development of next-generation composite materials. His work is funded by an Air Force Office of Scientific Research under a $7.5M Multi-University Research Initiative. Kisailus’ collaborator is Pablo Zavattieri, Professor of Civil Engineering and University Faculty Scholar at Purdue University.

In previous research, the team showed that the dactyl club is a multi-regional composite made of mineralized chitin—the same material found in the shells of insects and crustaceans—arranged in a number of unique structures. The exterior of the club, called the impact region, serves as hard, crack-resistant coating that enables the mantis shrimp to inflict incredible damage to its prey by transferring its momentum upon impact. The interior of the club comprises two regions: the periodic region, an energy-absorbing structure that dissipates cracks along a series of long helicoidal (spiral-like) fibers, and the striated region. In the current paper, the researchers show that the striated region comprises a series of highly aligned fibers that wrap around the club and stop it from expanding upon impact.

“We believe the role of the fiber-reinforced striated region in the smasher’s club is much like the hand wrap used by boxers when they fight: to compress the club and prevent catastrophic cracking. Together, the impact, periodic and striated regions form a club of incredible strength, durability and impact resistance,” Kisailus said. 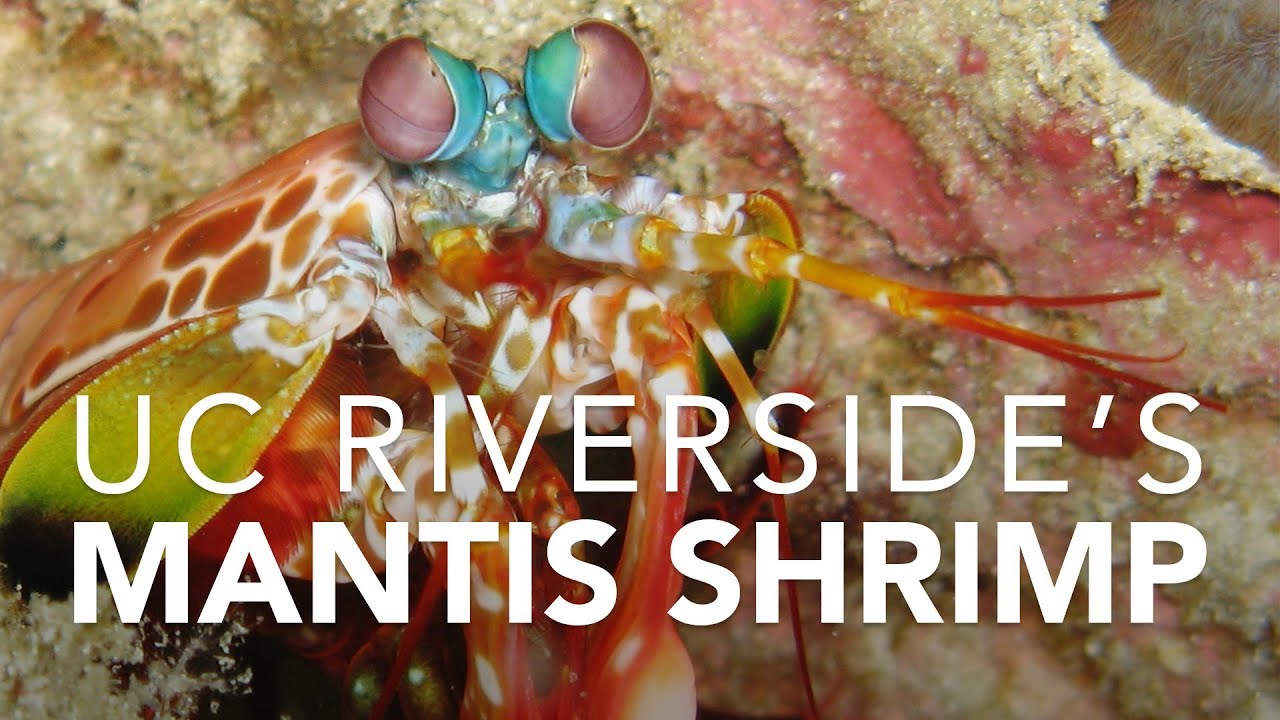 Kisailus said a similar striated architectural element is seen in the smasher’s more ancient cousin, the spearer, where it is thought to prevent the long, thin barbs from becoming deformed during penetrating strikes. The presence of this structure in the spear likely enabled the advent of the smasher and its biological hammer, a diversification that coincided with the appearance of hard-shelled prey with more sophisticated defenses. Interestingly, they also found a similar structure in the tibia of the land-based praying mantis, suggesting biology has utilized this design for similar functions.

Also in the paper, the researchers uncovered how the smasher carries out such rapid underwater attacks, which can occur at speeds of up to 23 meters per second. The profile of the club, together with an adjoining region called the propodus, is a hydrodynamic teardrop design that reduces resistance due to drag. Owing to this teardrop design, the acceleration of the club is so great (greater than a 0.22 caliber bullet) that it shears the water, creating cavitation (bubbles that implode) to yield a secondary impact on the mantis shrimp’s prey.

“Interestingly, aerodynamic cycling helmets and golf clubs already incorporate this design, suggesting that nature was one step ahead of humans in achieving high performance structures. The natural world can provide many more design cues that will enable us to develop high performance synthetic materials,” Kisailus said.

The title of the paper is “Ecologically Driven Ultrastructural and Hydrodynamic Designs in Stomatopod Cuticles.” In addition to Kisailus and Zavattieri, contributors include Lessa Grunenfelder, Garrett Milliron, Steven Herrera, Nicholas Yaraghi and Nigel Hughes from UCR; Isaias Gallana from Purdue University; and Kenneth Evans-Ludderodt from Brookhaven National Laboratory.

Mexican mangroves have been capturing carbon for 5,000 years