Projects include the study of aquatic insect communities, bumble bees, and the impact of climate change on plants

“Mildred Mathias was one of the founding faculty of the UC Natural Reserve System in 1965,” said Kimberly Hammond, director of the UCR Natural Reserve System and a professor of biology.  “The grants given out in her name each year by the systemwide office to graduate students working on one or more of the NRS properties can be instrumental in allowing them to do their work in unique and untouched environments.  Many students apply and only a few are given the awards.  Congratulations to Ryan, Kaleigh, Tesa, and Erica for their excellent proposals and promising field work!”

Conway, of Pottstown, Pa., is working toward his doctoral degree in evolution, ecology, and organismal biology.  He joined UCR in 2016 and expects to graduate in 2021.  The $1,500 grant he received will allow him to do research in the James San Jacinto Mountain Reserve on fine scale monitoring of aquatic insect communities in streams that undergo seasonal shifts from dry summers to wet winters.

“Aquatic insects have complex and diverse life histories that allow them to survive and reproduce in dynamic river ecosystems,” Conway said. “I will be quantifying the movement of flying aquatic insects along and away from streams across different landscapes, and use this data to create species-specific models of how habitat is connected.”

Conway explained that, globally, river networks have been heavily modified by humans, resulting in the destruction and disconnection of favorable habitat.

“Climate change is expected to exacerbate these problems, and threaten the existence of many aquatic species including fish, amphibians, and insects,” he said. “This research will allow us to determine when habitats are connected by the movement of species, and determine the most effective management for restoring habitat and protecting biological diversity.”

Conway expects the research will produce a clear picture of which landscape and in-stream features are acting as barriers or promoters for the movement of insect species.

“It will allow us to build and improve predictive models for choosing which stretches of river to restore or reconnect to provide the greatest benefit to biological diversity,” he said.

Conway received his bachelor’s degree in environmental science at Elizabethtown College, where he studied the spread of invasive crayfish in Pennsylvania and monitored the populations of amphibians in a newly restored stretch of river. He is currently funded by an Institute for the Study of Ecological and Evolutionary Climate Impact fellowship and works with Kurt Anderson, an associate professor of biology.

“The UC Natural Reserve System is an amazing resource that UC students have access to,” Conway said. “I have been fortunate to research at the James Reserve over the summer and the Mathias E. Mathias grant allows me to continue my project studying how we can protect aquatic species through global change.”

Fisher, of West Bloomfield, Mich., joined UCR in 2016.  She works with S. Hollis Woodard, an assistant professor of entomology, and expects to graduate in 2021. Her $1,000 grant will support her research at the Younger Lagoon Reserve, the Fort Ord Natural Reserve, and the Big Creek Reserve.

At these reserves, Fisher will perform behavioral taste assays on bumble bees collected from different places along the coast of California to see if they can taste different compounds depending on the habitat they are from.

“Most of our knowledge about bumble bee taste comes from only two bumble bee species that are commercially reared,” she said. “There are about 250 species of bumble bees, so it is important to compare the patterns we are seeing in the lab with wild populations. The project will be successful if I can get the wild caught bees to participate in the taste assays. If they do, the results will be interesting no matter what they are.”

Madsen-McQueen, of Springfield, Mo., joined UCR this year. She works with Marko Spasojevic, an assistant professor of biology, and expects to graduate in 2023.

The “up to $3,000” grant she received will allow her to do research at the Boyd Deep Canyon Reserve, which sits at a unique convergence of several ecological zones.

“I will be collecting plant data to document distributional range shifts that have occurred due to climate change, and to try to understand the role of environmental factors, such as soils, as well as interactions among different plant species, in determining their range shifts along an elevation gradient,” Madsen-McQueen said.

She explained that one of the biggest consequences for human-caused climate change is the rapid global reshuffling of species, both animals and plants. Plants are widely documented to be shifting upward in both latitude and altitude to track warming climate. Plant assemblages directly impact carbon and nutrient cycling, and their shifting distributions have huge implications for changes in ecosystem functioning, including directly impacting human well-being.

“Recent research is showing that the effects of small-scale habitat features, along with neighbor plant interactions, can have effects as strong as changing temperatures on species' range shifts,” she added. “This idea is supported by the highly idiosyncratic responses of species to changing climates. This research will help understand how plants are moving around and why, which will help us make predictions about what ecosystems in the near-future will look like. Arid ecosystems are particularly vulnerable to climate change effects, so it is additionally important to conduct research on plant communities in this system.”

Madsen-McQueen believes it is critical that efforts are made to continue to fund ecological research – to “better understand the natural processes that support human civilization.”

“Contrary to some beliefs, scientists studying global change do not make money directly from their research, and funding is increasingly scarce, particularly for early career research,” she said. “Funding for science has never been more critical.”

Madsen-McQueen graduated with a bachelor's degree from Missouri State University in Springfield, after transferring from a community college. She majored in environmental plant science, being interested in sustainable land management. Her interest and education in botany/plant ecology came from a series of jobs working as a field botanist and research technician for various agencies.

“I completely owe my career motivation to the passionate mentors I have had in these fieldwork positions, who showed me the power of detailed, on-the-ground observation in natural ecological systems, to which there is no substitute for understanding them,” she said. 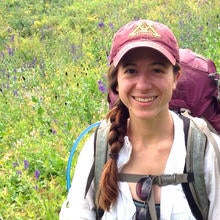 Born and raised in Pleasantville, NY, Sarro is a student in entomology and joined UCR in 2017.  She expects to graduate in 2023 with a doctoral degree.  Her $1,000 grant will support her research at the Yosemite Field Station – specifically, a project on early nesting queen bumble bees.

Sarro explained that bumble bees are social insects with a queen and many daughter-workers living together in a single colony, but they are annually social, meaning colonies start over every year. Each spring, young queens initiate new nests independently. For three-five weeks, these queens forage for resources, maintain the nest, and feed and incubate their young without the help of workers.

“My project will examine this early time in the colony life cycle to understand the effect of poor floral resources (low-quality food) on early colony development, and to understand whether queens can adjust their foraging behavior to cope with low quality habitats,” she said. “Specifically, I’ll be measuring things like the amount of time queens forage when contained within high- and low-quality habitats, the number of offspring they produce in the first month, and the size of those offspring as a function of habitat quality. As with any research project, success is defined not by the results themselves, but by making progress toward uncovering the truth.”

Colony initiation is often thought to be a particularly sensitive time in the bumble bee life cycle, but there have been very few experiments to actually test this. Sarro’s work will shed light on this understudied stage to determine the impacts of floral resources on nest initiation.

“Bumble bee populations are declining across the globe, and most current conservation strategies focus on mid-season floral resources that bolster large, social colonies,” she said. “If early nest initiation is, in fact, more sensitive to habitat quality than the social colony stage, conservation efforts may need to shift focus.”

“I am new to California, and I am eager to explore and work in this new landscape,” she said.