Pushing back against poverty

Mark Sebarrotin said UCR was his shot at the California dream; now, he wants to help others achieve their dream, too

Every year, the University of California’s UCDC program gives hundreds of students across the UC system the opportunity to live, learn, and work in Washington, D.C.

For Mark Sebarrotin, who spent spring 2017 in the capital as part of the program, it also seemed like a way to finally connect with other Filipinos in government — role models the political science major said he sorely lacked.

“I was so excited about the prospect of meeting other people in Congress who looked like me,” Sebarrotin said of his time in the capital. “But the reality ended up being that I couldn’t find one.”

The experience caused a shift in Sebarrotin’s thinking. His main focus at the University of California, Riverside, evolved into something more complex than “just getting through” to graduation, he said. 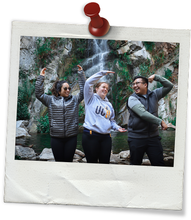 “Things started to become less about me and more about other people like me who don’t have the mentors or resources to really thrive,” Sebarrotin said. “Now, I’m trying to make my way up the ladder, so I can reach down and pull someone else up.”

A first-generation college student, Sebarrotin knows his polished appearance belies his background. He grew up in Monterey Bay, but far from the tony lifestyle depicted on HBO’s “Big Little Lies.”

His mother immigrated from the Philippines in the early 1990s; his father passed away when Sebarrotin, now the eldest of four children, was just 2 years old. Over the past 10 years, his family has struggled with homelessness, he said. But through it all, his mother and grandparents have continued to prioritize education as a pathway out of poverty.

“My family stayed in rooms in houses and washed our dishes in public places,” Sebarrotin said. “Because of the experience I had growing up, I told myself I never wanted to be in the same position again. I wanted to push back against that narrative, so when I came to UCR, I took every opportunity to get involved.”

He started with the Residence Hall Association, becoming part of a team that led the push to bring Wi-Fi to UCR’s residence halls. Inspired by the experience, he went on to join the Phi Alpha Delta Pre-Law Fraternity, canvass with College Democrats for local candidates running for office, and serve as a campus tour guide.

This summer, Sebarrotin will move to San Francisco to begin a yearlong term as a Coro Fellow, where he’ll cycle through four field placements in public affairs offices.

Ultimately, he hopes to return to his hometown.

“I love nature — I’m an avid hiker and outdoor excursionist — and so a big part of what I want to do is help preserve Monterey Bay,” Sebarrotin said. “I want to be an advocate not only for the environment, but also for some of the lower-income communities in the area that don’t have voices or whose voices aren’t as strong.”