The annual Tomás Rivera Conference has allowed participants from across the country to join discussions surrounding Latino/a literature, identities, race and more. The four-session series opens Wednesday, Oct. 14 with poet Rachelle Cruz, a lecturer with UCR’s Department of Creative Writing. Cruz is the author of “God’s Will for Monsters.”

Celebrating Rivera’s life as a pioneer in education means honoring the legacy he created, allowing other Chicanx/Latinx educators and authors to thrive in that world, said Alex Espinoza, UCR’s Tomás Rivera Endowed Chair and associate professor of creative writing.

“When I first heard of Tomás Rivera I was a student and knowing that a Mexican American had led such a successful life left an impression on me,” said Espinoza, who grew up in La Puente, attended San Bernardino Valley College and transferred to UCR in 1998. He graduated in 2000 with a bachelor’s degree in creative writing. 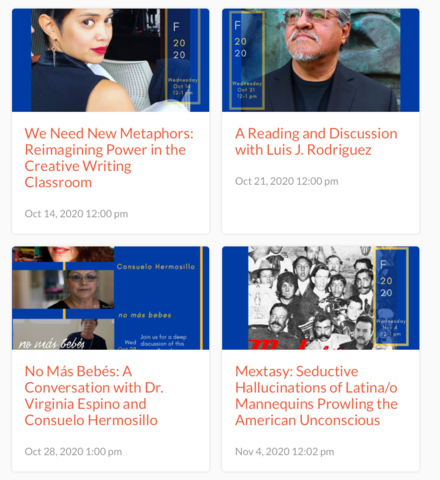 Rivera led UCR from 1979, until his death in 1984. After his passing, his wife, Concha Rivera, helped establish an endowment and the first iteration of this conference in 1988.

When COVID-19 altered the in-person conference originally scheduled for this spring, Espinoza, spent the summer transitioning the programming into an online gathering.

“Going virtual means it’s accessible to everyone, no matter where in the world the participant is,” Espinoza said, noting it’s now a four-week celebration rather than a two-day event. “We’ve opened access possibilities that before we hadn’t thought of.”

The conference is free and open to everyone. Registration is encouraged. The sessions are planned as follow:

“Many of the talks in this series will center on race, identity, marginalized voices, and examine the arts and humanities as tools of social change aimed at critiquing the Euro-centric, heteronormative, and patriarchal hierarchies at the heart of so many current national debates,” Espinoza said.