Newly discovered planet survived the death of its star

An international team of astronomers has reported what may be the first example of an intact planet closely orbiting a white dwarf, a dense leftover of a sun-like star that’s only 40% bigger than Earth.

The discovery is unique because stars usually destroy nearby planets as they begin to die.

“We know of many white dwarfs but finding planets around them is hard,” said Stephen Kane, a professor of planetary astrophysics at UC Riverside. “How did this planet manage to survive the end stages of its star?”

The Jupiter-sized object, called WD 1856 b, is about seven times larger than the white dwarf. It circles this stellar cinder every 34 hours, over 60 times faster than Mercury orbits our sun. It orbits a cool, quiet white dwarf called WD 1856+534, about 80 light-years away in the northern constellation Draco. The host star is roughly 11,300 miles, or 18,190 kilometers, across and may be up to 10 billion years old.

A paper about the system, led by Andrew Vanderburg, an assistant professor of astronomy at the University of Wisconsin-Madison, and colleagues from several dozen other institutions, including Kane, appears in Nature.

When a sun-like star runs out of fuel, it swells up to hundreds to thousands of times its original size, forming a cooler red giant star. Eventually, it ejects its outer layers of gas, losing up to 80% of its mass. The remaining hot core becomes a white dwarf.

Any nearby objects are engulfed and incinerated during this process, which in this system would have included WD 1856 b in its current orbit. The researchers estimate the planet must have originated at least 50 times farther away from the white dwarf

“The white dwarf creation process destroys nearby planets, and anything that later gets too close is usually torn apart by the star’s immense gravity,” Vanderburg said. “We still have many questions about how WD 1856 b arrived at its current location without meeting one of those fates.”

The detection of the Jupiter-size body was made using data from NASA’s Transiting Exoplanet Survey Satellite, or TESS, which monitors sky sectors for almost a month at a time, and retired Spitzer Space Telescope.

The astronomers did not see the planet itself. As a planet transits a star, it blocks some of the light and dims what TESS can see. However, many things can cause dimming, making it a challenge to determine if a planet is the source. Kane, a member of TESS’ science team, said the satellite’s short orbit of about 1.5 days allowed it to capture many transits, which helped the team determine that it was, in fact, a planet.

“Since the planet had to have originally been much farther away from the star, the interesting question is how did it get to its present location,” Kane said. “I think the two most likely scenarios are through interaction with another planet or with a disc of debris around the star.”

When two nearby planets interact, the result is usually chaotic, with gravitational forces throwing them out of alignment. Kane said interactions between a planet and the disc of debris around another star are smooother. A planet moving through the disc causes friction, pushing it closer to the star. The interaction of planets with discs usually occurs around young stars still in the process of forming.

“In this case, it’s possible that a debris disc could have formed from ejected material as the star changed from red giant to white dwarf. Or, on a more cannibalistic note, the disc could have formed from the debris of other planets that were torn apart by powerful gravitational tides from the white dwarf,” Kane said. “The disc itself may have long since dissipated.”

“We’re always looking for something unusual, and this is certainly unusual,” Kane said.

Kane, a member of UCR’s NASA-funded Alternative Earths Astrobiology Center and director of UCR's NASA-funded Planetary Research Laboratory, is available for media interviews about TESS and his involvement in analyzing its data and observations. 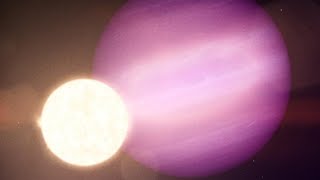