With four published collections and appearances in numerous outlets, Katie Ford’s poetry has found a wide audience. But over the last decade, the professor of creative writing at UC Riverside has embarked on a series of collaborations that have allowed audiences a unique way to experience her work — through music.

The first, with composer David Serkin Ludwig in 2011, came about after a mutual friend suggested Ludwig set text from Ford’s poetry to one of his compositions. A new experience for Ford at the time, the two would go on to collaborate on three projects involving Ford’s poetry and Ludwig’s music over the next several years. Their first collaboration, “Our Long War,” premiered at the Lake Champlain Music Festival in 2013.

Written during the U.S. wars in Afghanistan and Iraq, Ford’s poem was first published in the Virginia Quarterly and later included in Ford’s 2014 book, “Blood Lyrics.” In it, the speaker — whom Ford identifies as herself — contends with the complacency of the external world and her interior thoughts when both, at times, seem to carry on relatively unaffected by the wars raging across the globe. For his composition written for soprano, violin, and piano, Ludwig paired her text with sounds influenced by music of the Middle East, Ford said.

“I was startled when I first heard ‘Our Long War’ because it started off with immense power,” Ford said of the performance. “Later in the poem, there’s a confession: ‘not once have I dreamt of the war, I forgot it silently, easily.’ When this happens, David has the soprano quiet down into a kind of dreamy, hallucinatory lull.”

“Our Long War” went on to be performed at Carnegie Hall in 2014, as well as the Curtis Institute and the American Philosophical Society in Philadelphia, and in Spain, Germany, Italy, and Seoul among other places.

Ford’s second collaboration with Ludwig featured “Still Life,” a poem dealing with drug addiction first published in the New Yorker and later included in the Norton Introduction to Literature. Her collaboration with Ludwig premiered at the Ravinia Festival in Chicago in 2013. Ford typically hears the music Ludwig composes for the first time along with the audience. However, she couldn’t attend this performance, so she jokes that the results are still a mystery.

“I have never heard it because David wasn’t happy with the recording of it,” she said, laughing.

For those she has been able to attend, she said hearing her words set to music is both exciting and surprising, though she feels removed from the work and experiences it as something brand new.

“It’s like hearing this sudden revelation of what the poem has said to David, how he has heard it, what it inspired him to do,” Ford said. “To me, it’s a third piece of art — there’s my poetry, then there’s his composition, and then there’s the instrumentalists and vocalists who are making it a third thing. It’s my language, but it’s outside of the purview of my poem at that point.”

Ford and Ludwig’s most ambitious project to date, “The Anchoress” — which Ludwig received a Pew Grant to create — premiered in 2018 at the Kimmel Center in Philadelphia. Presented as a cycle of eight songs, the 29-minute monodrama features Ford’s text sung by a soprano inhabiting the voice of a medieval anchoress. Permanently sequestered into a small cell, or ‘anchorhold,’ as an act of supreme religious devotion, the anchoress chooses a waking death — becoming a ‘living saint.’

“It’s far more difficult a text than the other two that he had worked with, so we had really fascinating, long theological conversations about the anchoress,” Ford said.

She said Ludwig was inspired by 14th century French composer Machaut and combined both modern instruments and those from the era to tell the story of “The Anchoress” in his composition. It premiered with soprano Hyunah Yu, the saxophone ensemble PRISM Quartet, and the band Piffaro, who use a range of musical instruments from the late medieval and Renaissance periods.

“He wanted to create a full program, and to do that, he also created what he titled ‘Anchoress Songs,’ which were instrumental as he imagined the anchoress hearing music waft into her cell,” Ford said.

“In the main piece of music, my writing has bracketed portions where the text is missing, either because she’s been edited or redacted, or age has harmed the text. In those gaps, David used saxophones to represent the silences or erasures, imagining them as a form of harm done to her language.” 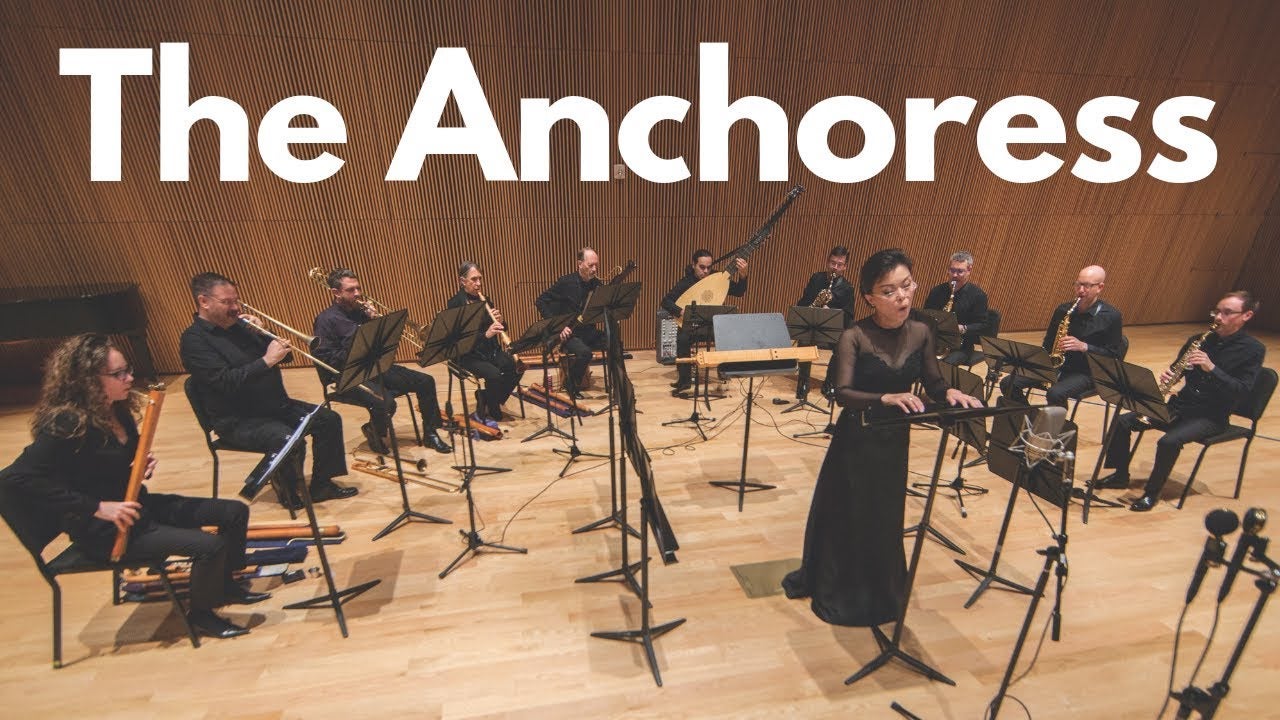 The performance garnered a writeup in The New Yorker and a live TV spot on NPR in Philadelphia. It went on to be performed in New York with plans to be toured further following the pandemic. “The Anchoress” has also experienced a second life, Ford said, with the album being released this year and the monodrama’s themes around isolation creating renewed interest.

She said her collaborations with Ludwig have been both successful and rewarding because of the immense trust the two of them have in one another, noting it is easy for relationships between collaborators to become manipulative or fraught without mutual respect.

“I never feel it’s a risk to let David set my language because he’s so talented and he chooses work of mine that he has an affinity for,” Ford said. “I think collaborations work best when both artists are willing for some surprise, and they don’t try to meddle with each other’s work. He never asks to edit my poetry, and I never ask for his music to be composed in a certain way.”

Collaborating in this way has also afforded her the ability to look at her poetry with fresh eyes, experiencing which parts of her words are heightened or emphasized by the music and offering insight into how her work may be understood and interpreted by readers.

“It’s a reminder to me that the poet never knows how a reader will receive something,” Ford said. “It’s humbling. And it reminds me how mysterious the whole act is, how mysterious art is, and how much reverence that brings about in me towards the arts.”

In what will be her fourth artistic collaboration of this kind, audiences will be able to hear brand new poetry by Ford set to music by composer Katherine Balch in a 21-minute cycle of 13 songs during a virtual concert April 10. Hosted by the Brooklyn Art Song Society, the collaboration between Ford and Balch is part of the organization’s New Voices Festival and will feature Ford’s long poem “Estrangement.”

Unlike her previous collaborations with Ludwig, who chose from work Ford had already written, she was tasked with writing a new poem specifically for the event. Inspired by the song cycle “Dichterliebe,” or “A Poet’s Love,” by composer Robert Schumann, “Estrangement” gives voice to the nameless woman from the original poems by Heinrich Heine.

“The director of the Brooklyn Art Song Society had said he always wanted to hear that female voice, so I was asked to write from that point of view,” Ford said. “Heine only describes her in terms of the pain she has caused him, at times demonizing her, but no one knows who the woman was.”

Ford said working with Balch has also been a new and rewarding experience, as Balch’s practice is very experimental, noting she often works with fragments of text and repeats phrases, which Ford said is typically against the “composer rule book.” Nonetheless, Ford has felt energized by the project, and has already made plans to work with Balch on a future collaboration.

“I’m so eager to hear how Katherine Balch has set this poem. Her work is intoxicating, strange, and brilliant,” she said. “I won’t hear the piece until April 10 with the rest of the audience.”

“Estrangement” will be available for streaming as part of the Brooklyn Art Song Society’s New Voices Festival at 7:30 p.m. on April 10. Individual tickets for the performance may be purchased or included as part of a digital season subscription.