While the trauma of war may seem like a weighty subject for a sitcom, a new series executive produced by Reza Aslan is framed around just that, as well as a host of other issues still affecting millions of Americans and Afghans following the war in Afghanistan.

Premiering April 1 at 8:30 p.m. on CBS, “United States of Al” follows Riley, a Marine combat veteran; and Awalmir, or “Al,” Riley’s best friend and former interpreter during the war. Having just arrived in the U.S. from Afghanistan after years of Riley’s efforts to bring him over, Riley and his family help Al navigate American culture and customs, while Al tries to help Riley in his own way as he struggles to readjust to life back home in suburban Ohio.

“These two best friends who have saved each other’s lives countless times in war start to rebuild their friendship in peace time, and Al continues to function as Riley’s interpreter, but instead of interpreting language, he’s sort of interpreting life for him,” Aslan said. “He’s helping Riley to pick up the pieces of his life, try to reunite him with his ex-wife and his daughter, and deal with the trauma of coming home from war. And at the same time, Riley is trying to help Al get used to life in a brand-new country.”

Aslan, a writer, scholar of religions, and professor of creative writing at UC Riverside, said he conceived of the series two years ago with long-time friend and TV producer Dave Goetsch, known for his work on “The Big Bang Theory” among other sitcoms. At the time, Goetsch had been hearing about the Special Immigrant Visa, or SIV, program offered to Afghans who served as interpreters for the U.S. military, many of whom have yet to receive visas years later, Aslan said.

“We completely reneged on that promise and absolutely abandoned these interpreters to their fate, many of whom have since been killed by Al-Qaeda or the Taliban,” Aslan said. “Just in Afghanistan alone, there’s somewhere between 17,000 and 25,000 interpreters who have applied for the visa that we promised them, and who have heard nothing yet.”

“It was kind of the perfect vehicle for us, not just to deal with the issues that we wanted to deal with, but also to present it in a way that could be appealing and popular and palatable to a large swath of the country,” Aslan said. “The sitcom is probably the most popular genre of entertainment there is, so it became for us the perfect way to tell what is in fact a very real, serious story, but to do so in a humorous and heartwarming way.”

The series was picked up by producer Chuck Lorre, whose credits include “Young Sheldon,” “Mom,” “Bob ♥ Abishola,” and “B Positive.” Aslan said Lorre, whom Goetsch and Ferrari worked with on “The Big Bang Theory,” was the first person they brought the series to, noting Lorre often explores serious topics through his sitcoms, such as the handling of addiction in his show “Mom.”

“Rather than wanting to just repeat a formula over and over again, over the last few years, he has really wanted to stretch the sitcom genre to its limits,” Aslan said. “Presenting him a sitcom that was about war and the trauma of war, and with this Muslim protagonist from Afghanistan in it, it turned out to be exactly the kind of thing that he was looking for.”

Apart from bringing the SIV program to light, Aslan said the series asks viewers to consider the reality of the U.S. today as the nation continues to face issues of racism and xenophobia toward immigrants.

“What is America? And what do we stand for?” he said. “What’s wonderful about this show is that it presents America through the lens of this Afghan who is experiencing it for the very first time, but is also unblinking in talking about the yawning gap between what America wants to be and what it actually is. And certainly, the failed promise that we made to the interpreters in Afghanistan and Iraq is kind of an expression of that — of what we strive to be and what we sometimes fail to be.”

The series also addresses how war strains relationships between veterans and their loved ones — as in the case of Riley and his estranged wife — and the grief that comes when not everyone makes it back home from deployment, something Riley’s sister Lizzy must grapple with following death of her fiancé.

“We don’t have a position on the politics that led to the war or the politics that have come to define the war,” Aslan said. “We just deal with the present and the way in which the war utterly changed the lives of so many millions of people. And we get to tell the story of two of those lives that were changed by it.”

Aslan said he has been committed to representation in media throughout his career, and his production company BoomGen Studios has been working over the last decade to reframe perceptions of people and cultures of the Middle East and other underrepresented communities. In order to appropriately tell the story of characters like Al and Riley, Aslan made sure to bring Afghans, veterans, and their families to the writers’ room to craft authentic narratives, which he said had never been done before.

“It was very important to us if we were going to tell the story about the relationship between a vet and an Afghan, that the people who were telling that story were vets and Afghans,” he said, “We’ve done something that I think can be applied to all shows going forward with how to truly represent the importance of diversity and representation in Hollywood.” 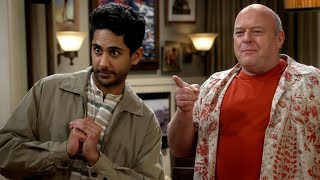 Latinos, British post-punk music, and growing up in Southern California